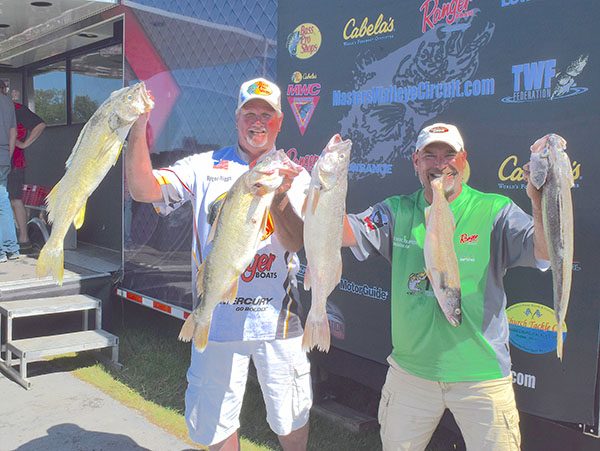 Cleveland night club owner Rodger Riggs and Avon Lake home builder Jason Kopf know Lake Erie like the backs of their hands, and how to catch its walleye. Mother Nature tossed a bit of a curveball at them with big winds and waves on Friday and Saturday, but couldn’t spoil their plans in the Port Clinton-based two-day $34,130 Bass Pro Shops/Cabela’s Masters Walleye Circuit Team Tournament.

Riggs and Kopf raced more than 30 miles each morning of the two-day MWC Team Tournament to target the schools of walleye they’d found earlier in the week. On Friday morning, after a very rough ride in Kopf’s Ranger boat, they found the walleye were still around on the Ohio-Ontario border north of Huron, and each afternoon they returned with five-fish tournament limits of walleye averaging more than 5 pounds each.

Riggs, who owns the popular Brothers Lounge in Cleveland, and Kopf, who works for his family’s Kopf Builders, weighed 30 pounds, 13 ounces on Saturday to go with a first-day catch of 25 pounds 5 ounces. Their winning weight was 56 pounds, 2 ounces.

They needed the extra weight. 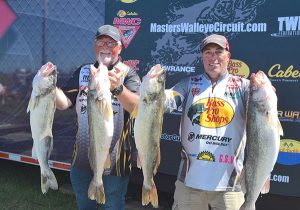 The largest one-day limit of five walleye in the Cabela’s MWC Team Tournament was weighed by Gordan “Butch” Rabetski (left) of Kimberly, Wisc., and Jim Passo of St. Charles, Ill. Their second-day catch of 39 pounds, 1 ounce was the largest of the tournament, moving the pair into second place. (Photo by D’Arcy Egan)

Their friends, Jim Passo of St. Charles, Ill., and Gordan “Butch” Rabetski of Kimberly, Wisc., on Saturday weighed the heaviest one-day catch of the tournament at a 39-pounds, 1-ounce. That moved them up to second place with a 55-pound, 11-ounce total, just 7 ounces behind the winners.

“Our prime fishing area was near the weather buoy on the border. It is sort of a transitional feeding area and with our sonar, we could see schools of nice walleye continually loading up on the spot, then unloading,” said Riggs. “We had to be patient, diligently sticking to our fishing program while we waited for hungry walleye to arrive and feed.”

Their technique was fairly basic for deep-water walleye fishing. They were trolling with diving plugs. Bandit and Smithwick Perfect 10s were producing best, with blue-silver and purple-pink color patterns catching most of their walleye.

With 2-ounce snaps weights attached to the fishing lines, the lures were swimming at just the right depths. On-line Offshore Planer Boards kept line and lures away from the sight and sound of the boat.

“We had about a dozen tournament boats around us on Friday, and that increased a bit on Saturday,” said Riggs. “Everyone was courteous, and on our first 200-yard pass through our prime area we nailed two 7-pound walleye. On the second pass we had our five-fish tournament limit, and started upgrading our catch at 10:30 a.m.”

Riggs, 58, and Kopf, 48, have been fishing team tournaments together for eight years, and have found success. They have finished in the top 10 a number of times. Their personal best was 17th place in the Cabela’s National Team Championship on the St. Marys River at Sault Ste. Marie, Mich. on June 1, despite a huge field of 187 two-angler teams.

“We enjoy fishing together and the challenge of tournament fishing. We compete in 25 to 30 tournaments each year,” said Riggs. “Next up is an MWC on Aug. 2-3 at Sturgeon Bay, Wisc., and this win will really have us charged up.”