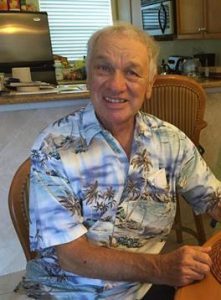 Roger J. Dennerll entered the Gates of Heaven on Easter morning, April 12, 2020, after 79 years of a fully lived life. After battling cancer the past few years, his passing at his Florida home was very peaceful, with his adored wife of 55 years, Vivien, at his side, and family members Patty and Tom. In his last moments, he listened to one of his favorite songs, Amazing Grace. A memorial service and interment will be held on June 12, 2021, at the Sunset Chapel located at 6245 Columbia Rd in North Olmsted, Ohio, at 2 p.m. Please arrive up to one hour before for Gathering of Family & Friends. Following the funeral service, we will proceed to the gravesite at Sunset Memorial Park. Our blessing at the gravesite will include military, police, and FBI honors

One of Roger’s favorite phrases, when talking about something Vivien and he had experienced, was “It was incredible!” And he truly did live an incredible life.

Roger was born and raised in Cleveland, Ohio. After graduating from John Marshall High School, he joined the U.S. Marine Corps, where he served with honor and distinction. In 1963, he became a member of the Cleveland Police Department, where he served in many roles. Starting in basic patrol, he was promoted to a detective in the robbery squad. He later was promoted to Officer-in-Charge of the Special Operations Strike Forces, and he served as a member of the City-Wide Vice and the Crisis Intervention Team. He served as president of the Metropolitan Crime Clinic and was a member of the FOP Cleveland Lodge 8 for 44 years, and served as delegate to the conference in Oklahoma.

Roger graduated from the FBI National Academy in Quantico, Virginia, where he was selected to be the spokesman for the 250 U.S. and international students in that class, and he was chosen to lead the ceremonial laying of the wreath for the tomb of the unknown soldier at Arlington National Cemetery. He completed his undergraduate studies in Public Administration and Real Estate, and his graduate studies at the University of Virginia in Criminal Justice, while attending the FBI National Academy.

Airport hijacking for which he received the key to the City of Cleveland. When Roger retired from the Police Department after 27 years of distinguished service, the Cleveland Plain Dealer wrote that the “gladiator of vice” had retired.

Roger always stayed true to his law enforcement roots, and he served in a wide range of law enforcement positions after retiring from the Cleveland Police Department. Upon his retirement in 1990, he became the Director of Public Safety and Chief of Police at Bowling Green State University, where he also served on the Directors Council and as Special Assistant to the Provost, retiring from those positions in 1997. He served as the President of the Ohio Chapter of the FBI National Academy and as an executive board member of the Ohio Chiefs of Police, as well as the Ohio Chiefs’ representative to the State Human Diversity Commission. He also served as an instructor with the Ohio Association Chiefs’ of Police and the Ohio Police Officer’s Training Council, where he taught the course “Dealing with Suicidal Management & Ethics,” and he taught classes at the Cleveland Metroparks Police Academy.

In addition to his deep law enforcement experience and accomplishments, Roger was a savvy and successful businessman. He became a licensed real estate broker and founded RJD Realty & Landscaping, which Vivien and he used as a vehicle not only for real estate brokerage services but also as a management company for their income and rental properties. Roger’s intellect, leadership skills and deep experience in real estate were recognized by his many neighbors, who elected him to serve as president of the homeowners association in Marblehead, Ohio for 27 years, as president of a 113-unit condo association in a Pennsylvania ski resort, as president of a 260-unit condo association in Lake Worth, Florida, and with South Rivers’ V5 Condo Association in Stuart, Florida.

Roger led an incredibly rich life, doing almost everything together with Vivien. After he retired, they travelled to over 123 countries, recently completing a three-week trip to Egypt. They thoroughly enjoyed seeing new places, meeting different people, exploring different cultures, and (of course) sampling their food and wine. They often regaled family and friends with stories of their travels.

As members of the “Keel Haulers Canoe Club,” Roger and Vivien paddled some of the best rivers in the eastern United States. But not content to simply be accomplished paddlers themselves, they taught others what they had learned. They served as volunteer instructors/trainers for over 15 years for the Greater Cleveland Chapter of the American Red Cross, and they enjoyed teaching boating safety and skills for canoes, kayaks and sea kayaks. In 1998, Roger served as the Chairman of the Greater Cleveland Chapter, and Roger and Vivien were awarded the American Red Cross Vega Award for outstanding service to the National Red Cross in the Ohio Region.

Roger and Vivien also enjoyed motorized boating activities. They were active members of the Put-in-Bay Yacht Club for many years, where each of them served in many leadership roles, including (for each of them) as Commodore of the Club. Roger was most appreciative of the deep friendships that he and Vivien forged through PIBYC.

Roger’s and Vivien’s love for the great outdoors extended far beyond paddling and motor boating. They were avid skiers, and skied for decades in Seven Springs, Pennsylvania and Vail, Colorado. And they enjoyed hiking and birding in Florida and elsewhere. Roger, with some prodding and assistance from Vivien, also became quite accomplished in both dancing and singing. They were members of the Poinciana Players in Lake Worth, Florida, where Vivien and he enjoyed starring in plays and musicals for 17 years. Almost certainly, he was the most talented dancer and singer to ever serve as Cleveland’s top hostage negotiator.

Roger was known for using humor in dealing with people and for his storytelling. He touched many lives, and he will be sorely missed.