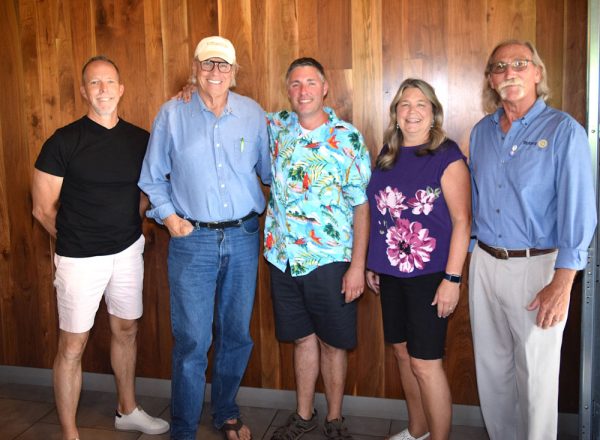 When John Davenport was sworn in as the new president of Rotary Club of Port Clinton on Tuesday, June 28, he brought to the position fresh enthusiasm about Rotary’s future. Davenport wants to attract new members and has already added a new fundraiser, a cornhole tournament, to this year’s schedule.

Although he wants to bring change to the club, he will stay grounded to Rotary’s foundational mission to help others through “service above self,” said Davenport.

“But I can’t do service without money, and I can’t have money without fundraisers, and I can’t staff fundraisers without Rotary members,” Davenport said. “My first step is to get membership up.”

A bigger team of members can create more opportunities for service through Rotary, which has a strong history of impact in Ottawa County. Rotary Club of Port Clinton has annual awards of several scholarships to Ottawa County seniors every year and hosts an annual dinner for Port Clinton High School honor students, their parents and teachers prior to the school’s scholarship banquet.

“We put on aprons, cook, clean and scrub. What we try to do is live by example and create the next generation of helpers,” Davenport said.

Rotary Club of Port Clinton engages in community service projects throughout the county as needs arise. They have volunteered at the Ottawa County Summer Lunch Program hosted by Ottawa County Family Advocacy and manned Red Kettles for the Salvation Army. Soon, Rotarians will paint the Salvation Army’s aging kettles and booths, and next summer, they will help Ala Carte Café prepare lunches for a veterans’ dinner.

“The manager told me they will need help preparing food. That’s exactly what I want. I can get a team of 10 people together, and we can knock out meals in no time,” Davenport said. “We support nonprofits that need some help, as well.”

In addition to manpower, Rotary also gives financial support to many local nonprofits such as Ottawa County Community Foundation, Light House Sober Living and Bistro 163. Funds are raised through the annual Pizza Challenge and the Rotary’s popular Perch Wagon.

“All of the money we make goes to the public, to the people of Ottawa County,” Davenport said.

But to give more and do more, Rotary has to make more, so Davenport added a third fundraiser this year. The Rotary Club Cornhole Tournament will be held at there Meals on Madison (M.O.M.) Area in downtown Port Clinton on Saturday, Sept. 17.

“We are selling sponsorships to local businesses. The businesses will benefit because this is after Labor Day, and it will bring people downtown,” Davenport said.

Davenport said he was recently asked to explain why someone should join Rotary when they can donate time and money to the community on their own. He pointed out Rotary International’s 1.4 million members, 46,000 clubs and the $3 billion Rotary has invested in projects in the last 100 years. With its extensive support, Rotary has served in the world’s poorest corners, ss well as in Davenport’s community.

“Why join Rotary? Because it’s bigger than just us,” he said.

For more information on Rotary Club of Port Clinton, contact John Davenport at 419-349-6177 or colonelcrash@yahoo.com.