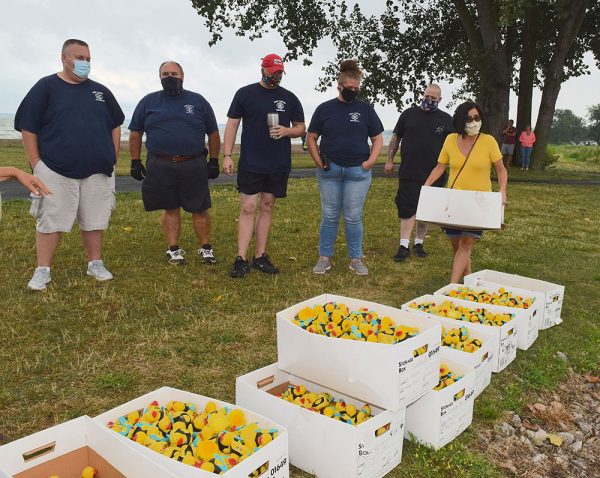 On Saturday morning, a forecast of thunderstorms later in the day made for a very nervous group of officials from United Way of Ottawa County. They decided that rain or shine, their Incredible Rubber Duck Race scheduled for 8 p.m. was going to happen.

As groups of Port Clinton firemen shouldered the burden of launching about 1,300 ducks in Derby Pond in Waterworks Park, men and women who know how to handle situations that include a lot of water, whether it’s from a fire hose or Mother Nature, were ready.

The thunder and lightening never made the scene, but a surprising number of spectators did. Mother Nature brought on enough wind to have the flocks of little ducks moving efficiently east to west on Derby Pond, and Ed Carlson of United Way was ready to snatch the winning rubber ducks from the water at the end of the course. 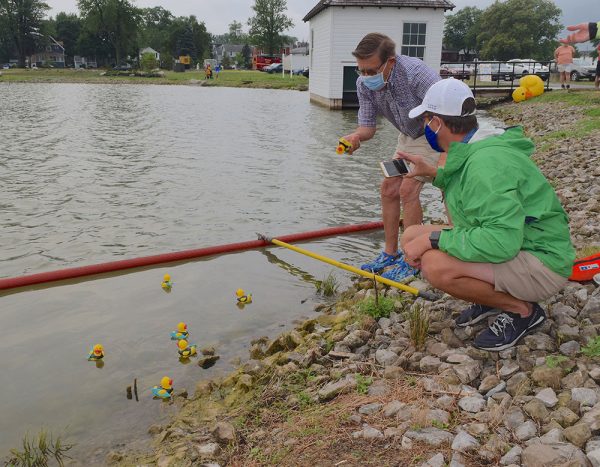 Ed Carlson, the chairman of the Ottawa County Advisory Board of United Way, captures the little, wiggly winner of the Incredible Rubber Duck Race on Saturday at Derby Pond in Waterworks Park. Chris Singerling of the Ottawa County Improvement Corporation videotaped the close finish. (Photos by D’Arcy Egan)

For a rerun of the race, check out the video of the slow-moving action on the Facebook page of United Way in Ottawa County. It was filmed by Chris Singerling, husband of Jessica Singerling, the manager of donor relations for the local United Way.

Needless to say, United Way officials were thrilled with the success of the Incredible Duck Race, which exceeded its goal of 1,000 entries.