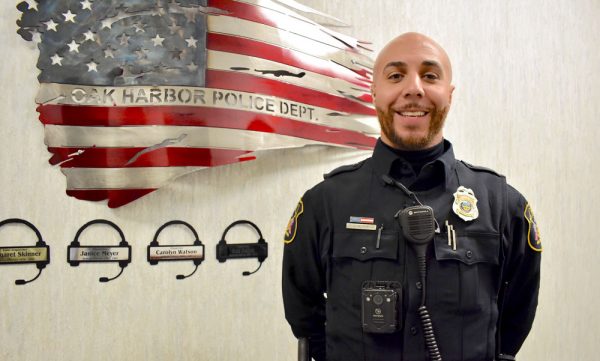 Oak Harbor Police Department announced the deployment of body-worn cameras, a goal it was able to reach earlier than expected after receiving a grant of almost $24,000 from the State of Ohio.

In recent months, Oak Harbor’s first responders have implemented safety improvements and protocols expected to save lives. With the addition of police department body-worn cameras, the standardization of emergency call signs and a system-wide communications upgrade, the Village aims for a safer environment, both for emergency personnel and residents.

In March, the Oak Harbor Police Department (OHPD) announced the deployment of body-worn cameras, a goal it was able to reach earlier than expected after receiving a grant of almost $24,000 from the State of Ohio.

“The cameras will not only record evidence but promote accountability, transparency and professionalism by documenting officer conduct and interactions with the public,” said Oak Harbor Police Chief Eric Parker.

The grant made possible the purchase of 10 cameras, uniform mounting equipment and a computer with docking stations to download video data. All OHPD officers will be outfitted with the cameras as part of their uniforms.

“Receiving this grant has enabled us to add state-of-the-art camera technology to better serve Village residents,” said Chief Parker, noting other county departments already use body-worn cameras, including Ottawa County Sheriff’s Department and the Elmore Police Department. The grant OHPD received is expected to fund nearly all of the project through 2025.

Another recent safety upgrade incorporates standardized emergency-grade call signs for emergency responders. According to Portage Fire District Chief Barrett Dorner, using a numbering system, in which each emergency responder is given a number unlike any other responder, reduces confusion. The change has been particularly helpful to the firefighters in the area.

“On the fire side, we had a lot of numbers that completely repeated or were far too similar for the chaos of the fireground,” said Chief Dorner. He explained that Portage had an Engine 5, as did a neighboring department. Another department had an Engine 7, and yet another had another Engine 7.

“Instead of using our full name — Portage Engine 5 — we decided to simply pick a different name,” said Chief Dorner, adding that the Portage station became “Station 37” last fall. It fit the numbering scheme utilized by, collectively, Allen-Clay Joint Fire District, northern Wood County, all of Lucas County, and parts of other counties.

“Going to a crowded scene with lots of regional assets, we won’t need to use our full name. Engine 37 itself means a Portage engine,” added Chief Dorner. “It’s short, simple, and aids us in keeping track of our crews.”

OHPD’s previous communications system, elements of which ranged from six to 12 years old, consisted of 460 radios that were subject to FCC narrow-banding requirements. Frequency narrow banding resulted in difficulty receiving person-to-person and person-to-dispatch communications. The communications grant provided more than $11,000 in upgrades, including new Multi-agency radio communications (Marcs)-IP portable radios for use on the P25 platform.

The OHPD simultaneously upgraded its dispatch center to function on that platform, impacting the police, street, electric and water departments, along with Mid-County EMS. According to Chief Dorner, Portage Fire District will also be utilizing Marcs radios in the very near future.

OHPD’s communication system is used 24-hours a day. Serving more than 2,700 residents of the Village and supporting the Davis-Besse Nuclear Power Station, OHPD also has mutual-aid response agreements with the other nine law enforcement agencies in Ottawa County. It provides dispatching services to Carroll Township, which also received grant monies for radio upgrades. Oak Harbor Utilities and Carroll Township Police Department, Maintenance, Fire, and EMS have benefited from the switch to the P25 platform. The system provides interoperability between departments, with the Ohio Department of Transportation and with the Ohio State Highway Patrol.

“The recent technology improvements have greatly ensured the safety of Oak Harbor residents and first responders, for years to come,” said Chief Parker.