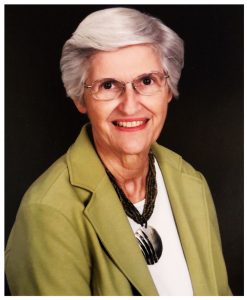 Born in Port Clinton on Oct. 3, 1937, the adored only child of the late Charles and Harriet DeWitt, she grew up on the shore of Lake Erie. She enjoyed boating with her father who owned a local hardware store where she worked as a stock girl in her youth. Always a conscientious student, she graduated from Port Clinton High School where she was the 1955 State of Ohio Debate Champion and the only woman on the four-person team her senior year. She attended Denison University in Granville, and transferred her junior year to Northwestern University in Evanston, Ill., to study Speech Pathology. She was a member of Alpha Phi and graduated from Northwestern in 1959. Her dream was to live in California and she received a scholarship to Stanford University in Palo Alto, Calif., where she earned her Master’s Degree in Speech Pathology. Despite her esteemed educational pedigree, she would be the first say, “You know, it was much easier to get accepted back then.”

After her first position teaching in Belmont, Calif., she was offered a job as a Professor at Bradley University in Peoria, Ill. She moved to Peoria—sight unseen—with a plan of staying one year. At the picnic for new faculty, she met a young Professor of Mathematics, Gary Tippett, and she was charmed. The two were married for 26 years until his untimely death in a bicycle accident in 1992. They had two daughters, Lynn (John) Marlott of Elmhurst, Ill., and Julie (Ken) Simon of Glenview, Ill. They survive along with her grandchildren, Sam, Alex, Isaac, and Jane Marlott, all of Elmhurst, Ill.; and Paige and Nicholas Simon of Glenview, Ill. Also surviving are cousins Ann, Megan, and Erin Eurenius of suburban Cleveland.

Her career as a practicing Speech Pathologist spanned many years, including time with Easter Seals and eventually the Peoria Public Schools, where she served as a school speech therapist for more than fifteen years. She was beloved by her students, many of whom were developmentally disabled and severely autistic children. She retired in 1994.

She spent her life actively engaged with organizations that were important to her, mostly focusing on women’s education, including the American Association of University Women, of which she was recently Co-President of her local chapter; American Speech-Language-Hearing Association; Delta Kappa Gamma International Society for Key Women Educators; and P.E.O., a philanthropic organization dedicated to women’s education. She was involved in many social groups, including the Bradley Women’s Club; the Peoria Women’s Club; and As You Like It, an arts club founded in Peoria in 1901. When she wasn’t volunteering her time mentoring young students, she loved traveling, reading Charles Dickens, and cheering on the Bradley Braves. She was a member of the University United Methodist Church.

In 1999, after many years as a widow, she married Robert (Bob) Walker, whom she met at Bradley’s Osher Lifelong Learning Institute. He precedes her in death. With her marriage to Bob came an expanded family of stepchildren, grandchildren, great-grandchildren, nieces, and nephews, all of whom she adored. She is survived by seven stepchildren: Barbara (Dr. Albert) England of Urbana; Martha Walker of Cincinnati; Christopher (Jenny Lerum) Walker of Evanston; Janet (Jeffrey) Lange of Pekin; Nancy (Mark) O’Neel of Lincoln, Neb.; Robert (Elizabeth) Walker, Jr. of Cincinnati; and John (Roberta) Walker of Arlington Heights. She also leaves behind 14 step-grandchildren and many step-nieces and nephews.

She is deeply loved by her family and will be remembered most for her kindness and positivity, which she maintained until the end. A private service will be held in Port Clinton, with a Celebration of Life planned for a later date. Memorial donations may be made to the Alzheimer’s Association in memory of Sally Tippett Walker or the Gary R. Tippett Memorial Scholarship c/o Bradley University, 1501 W. Bradley Avenue, Peoria, IL 61625. Gerner-Wolf-Walker Funeral Home & Crematory, Port Clinton, is assisting the family with arrangements. Online condolences may be shared with the family at www.walkerfuneralhomes.com.