Salvation Army has ‘secret’ Santa waiting in the wings!

Yaneek Smith, a contributor for The Beacon, was a bell ringer for the Salvation Army this week at Walmart in Port Clinton, which has a pair of Red Kettles. (Photo by D’Arcy Patrick Egan)

The coronavirus and the tough economic times have given us a greater appreciation for the work the Salvation Army does in the community.

The local service center, at 1834 East Perry Street, has provided assistance to people in Ottawa County for years, and its importance has never been greater. Whether it’s helping people buy groceries, pay rent or purchase Christmas presents, among so many other things, the Salvation Army is there to assist in times of great need.

Maureen Saponari, serving in her 13th year as the director of the center, talked about its philosophy.

“We’re all trying to do the same thing, by making a difference in our community. We like to think that we’re not providing a handout but a hand up, we just want to help people get through this rocky time,” Saponari said. “I just stepped back and listened to the

“That really makes a difference.

“We help with utilities, rent, mortgages, car repairs and prescription medication, for example. Sometimes people need steel-toed boots for work, or we’ll write a voucher for the Portage Resale Center for something. I go directly to the vendor. There are families that have been relocated, kids have been uprooted, families who don’t have a lot, so we make sure the families are taken care of.

To give the Salvation Army a surprising boost in this year’s efforts, Saponari has revealed this week that she has a “Secret Santa” waiting in the wings. It is an anonymous donor who will match the Salvation Army Red Kettle donations all around Ottawa County. 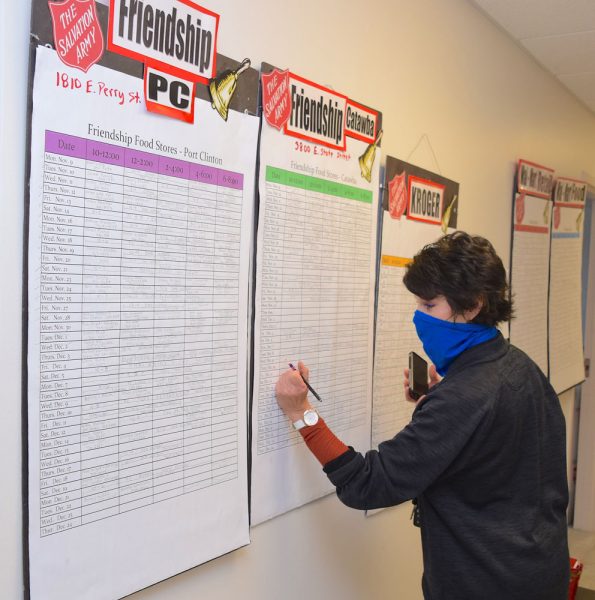 Director Maureen Saponari of the Salvation Army has been juggling volunteers on her extensive lists of bell ringers at the Red Kettle sites around Ottawa County. That will be especially import in the final week of the drive, with a “Secret Santa” ready to match those donations up to $5,000! (Photo by D’Arcy Patrick Egan)

From Monday through Thursday, which is Christmas Eve, the kettles will be collecting money for the final time this season. The anonymous donor has agreed to match the donations up to $5,000. The kettles are stationed at Walmart (both entrances) and the two Friendship Food Stores in Port Clinton as well as Kroger, Community Markets in Oak Harbor and Miller’s Market in Genoa.

Some sites may not be staffed at certain times because fewer people are “ringing the bell” for fear of contracting the coronavirus. To fill in the gaps, volunteers and local organizations are welcome to adopt-a-kettle and provide bell ringers in the coming days.

During her tenure, Saponari has worked to increase the Salvation Army’s presence in the community and recruit volunteers by speaking to businesses, churches, the local government and other organizations.

“My late husband and I were business owners, and I worked at Mon Ami. I got to know a lot of people in the community and established friendships — you get out there and do the work,” she said. “I have done a lot of speaking engagements, public relations, Facebook. I treat it like a business, because it really is.”

The Salvation Army was founded in 1865 by William and Catherine Booth in London and now has a presence in 131 countries with 1.6 million members and 15,400 congregations.

“They started with helping people — the drunkards, the homeless people,” said Saponari. “They worked to feed the poor and house the poor, and they did it just as volunteers because they saw the injustices in the world. They wanted to help the poor and the destitute.”

“Why do the volunteers do this? They’re doing all of this work for free. I can’t thank them enough, they really make it happen. It’s just amazing, everyone just comes together and knows it’s for the greater good,” Saponari said. “I want our volunteers to know how important they are, between the bell ringers, the people donating toys and clothes, it really does take everyone as a team. I have so much gratitude for our volunteers. I don’t think I’ve ever had a client that wasn’t grateful.”

For more information, to volunteer and to donate, feel free to contact Saponari by phone at (419) 732-2769 or by email at Maureen.Saponari@use.salvationarmy.org.