The Salvation Army in Port Clinton relies on platoons of volunteers throughout the Christmas season. Last week it called on its special squad to make sure local children from more than 400 families would have gifts under their Christmas tree.

Director Maureen Saponari of the Salvation Army was the Toy Distribution drill sergeant, and many of her soldiers were in uniform. They came from U.S. Customs and Border Protection, Ottawa County Sheriffs Department, Davis-Besse Nuclear Power Station and many other police and fire agencies.

“It’s something we look forward to every year,” said Aaron Frias, joined by his wife, Kendra, both workers at Davis-Besse. Kendra was wearing her elf clothing, as well as a major league smile.

“Our son and his girlfriend are helping out too,” said Kendra. “We’re delighted to be able to help people at Christmas who are having some hard times.”

The Davis-Besse crew back at the power facility also collected a massive amount of toys for the distribution, and donated cash to the cause.

The most impressive donation again this year came from Capt. Bill Marshall and the Ottawa County Sheriff’s Department. They donated 38 bicycles, a premier gift for a youngster at Christmas. The bicycle giveaway was funded by Marshall and his family, the Sheriff’s Department and county agencies ranging from the Prosecutor’s Office to Common Please Court and the Sanitary Engineers.

“It’s all about the kids,” said Director Maureen Saponari. “We’re not going to let a child wake up on Christmas without toys. I’ve been out on Christmas Eve to provide last-minute gifts.”

The Salvation Army helps more than 1,000 families throughout the year, and support for its Red Kettle Drive is community-wide each holiday season.

“Our Red Kettle Drive began on Nov. 12 and wraps up on Christmas Eve,” said Saponari. “We’re so grateful for the generous last-minute donations from the “snow birds,” the local summer folks who headed south many weeks ago but still remembered us with a donation.”

Many restaurants and other businesses make important contributions. The Orchard Restaurant on Catawba Island filled very large boxes with toys, and donated $746.

Despite the crowds at the Toy Giveaway, distribution was as smooth as silk. Families must register, and are assigned specific times to pick up gifts. Each person or couple is matched with a volunteer carrying a large plastic bag, helping them pick the most appropriate gifts for their children.

“Warm clothes are always needed,” said Saponari. “And we always have the types of toys that will make children smile on Christmas morning.” 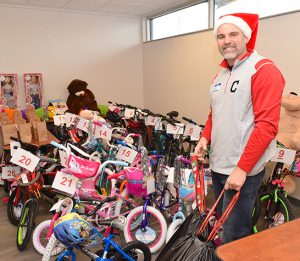 Aaron Frias, a Port Clinton volunteer from the Davis-Besse Nuclear Power Station, celebrated his 50th birthday while at the Salvation Army Toy Giveaway, helping parents and grandparents pick out age-appropriate gifts their children will find under the Christmas tree this year. That included 38 bicycles donated by Capt. Bill Marshall and the Ottawa County Sheriff’s Department. (Photos by D’Arcy Egan) 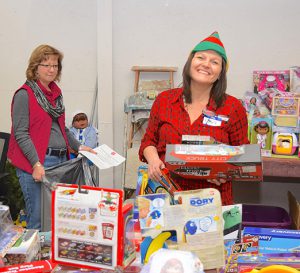 One of the Salvation Army’s hard-working elves at the annual Toy Distribution was Kendra Frias of Port Clinton, who works at the Davis-Besse Nuclear Power Station. 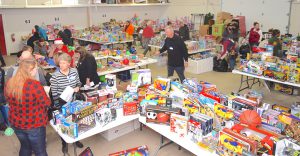