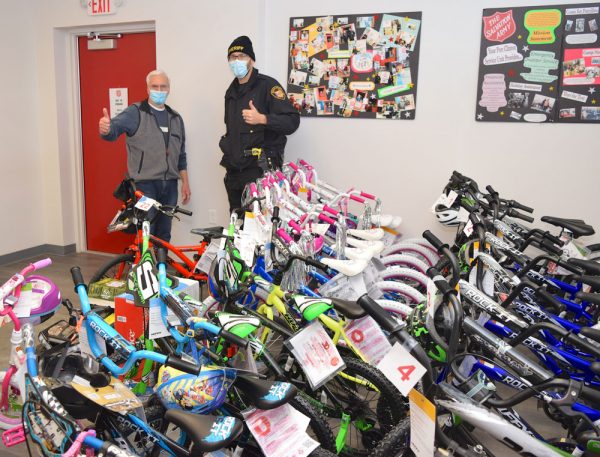 Jim Boule, left, the setup chief for the Salvation Army toy distribution, and Don Kreager of the Ottawa County Sheriffs Department, will soon distribute the 26 bicycles donated to the Salvation Army this year by Bill Marshal and his family and friends. (Photo by D’Arcy Patrick Egan)

The Salvation Army has enjoyed a surprisingly successful holiday season against all odds this year, and Director Maureen Saponari knows why it happened. In addition to her hard work and the gift-giving traditions she has created, hundreds of volunteers have made it happen.

“We’re coming down the home stretch right now, and I have to admit this year has been overwhelming because of the COVID-19 pandemic,” said Saponari. “For instance, we had to spread out the gift-giving over four days this week, instead of just one day, to meet social distancing mandates.”

Hundreds of bell ringers have manned the Salvation Army’s Red Kettles around Ottawa County, and this week a “Secret Santa” is matching kettle donations up to $5,000. That could help meet this year’s goal of $69,000, its highest in local history.

Despite having to go virtual with the Tree A Rama Auction this year, generous bidders helped to raise $8,640 for the Salvation Army.

Making this region’s Salvation Army success special have been volunteers whose gift-giving has become tradition. Bill Marshall of the Ottawa County Prosecutor’s Office has been buying new bicycles the last three years for the Salvation Army to give away at Christmas. 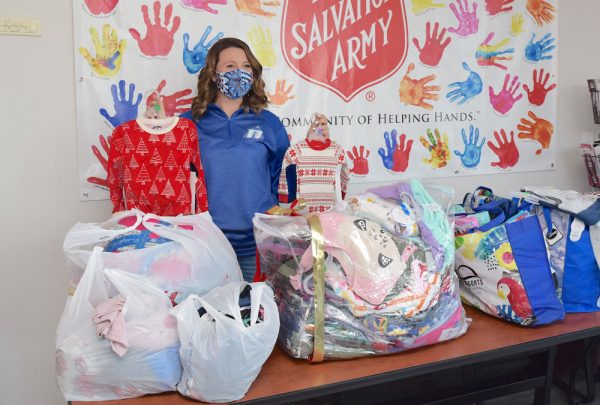 What does 301 pairs of new pajamas look like? Paige Raybuck, a pre-school teacher in the Danbury School District, rounded them up from family and friends all year and and for four christmas seasons has donated them to the Salvation Army as a holiday giveaway. (Photo by D’Arcy Patrick Egan)

He told his family and friends to give him bicycles for boys and girls for Christmas, and the first year there were five two-wheelers. Last year that ballooned to 40 bikes, and the pandemic-shortened campaign added 25 bikes this year.

“Folks at the courthouse are always so generous, and family and friends kick in,” said Marshall. “This is my Christmas gift to myself. I know that without this, a lot of kids would not have a bike, something I really treasured when I was a kid.”

Paige Raybuck of the Danbury School District is the “Pajama Lady,” getting the idea of having people donate new pajamas for the Salvation Army giveaway. She solicited pajamas from other teachers, friends and families. Four years later, Raybuck is getting CARE packages of new pajamas from all over Ohio.

“The donations are coming from everywhere. I know a new set of pajamas for Christmas is always appreciated, whether you’re a little kid or a teenager,” said Raybuck. “In four years, more than 750 pairs of pajamas have been donated. This year’s total of 301 pairs is a huge jump from the first year, when I received 60 pairs.

“It keeps growing, and it is really gratifying. My family lives all around Ohio, and they’ve been growing the out of town ‘jammies’ donations a great deal.”