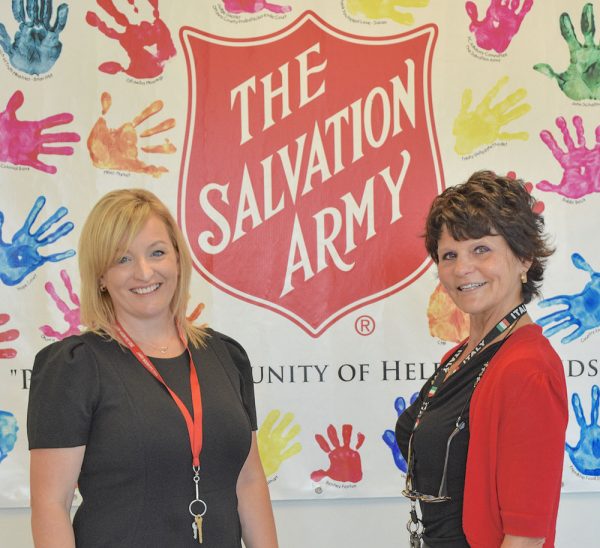 Kami Sayre, left, is the new Salvation Army of Ottawa County Service Center Director. She is taking over the position from Maureen “Moe” Saponari, right, who leaves behind years of compassionate impact in the community. (Photo by Sheri Trusty)

When Saponari steps away from the director’s position that she has held since 2008, she will leave behind years of impact that changed the lives of countless county residents.

“The nice thing about this job is there’s the administrative piece, but there’s also the actively serving piece, the helping people piece. There’s nothing like telling someone we’re going to help you not be homeless this month,” Saponari said. “And hugs are part of the job.”

Saponari is confident Sayre will bring the competence and compassion needed to continue to make the same level of impact in the community. Sayre comes to the position with a tremendous amount of social service experience and a heart already focused on helping local residents.

She is a former children’s services caseworker and was employed most recently at Ottawa County Jobs & Family Services, where she was an income maintenance eligibility specialist.

As Saponari and Sayre met at the Salvation Army Service Center for preliminary training last week, Saponari reminisced as she looked at photos of many of the people she had loved and lost since she was hired as director.

Among them was a photo of 14-year-old Harley Dilly, who died tragically in Port Clinton in 2019. He was one of the hundreds of kids whose lives were impacted through the time they spent with Saponari at the Salvation Army’s summer camp.

“Harley was one of the coolest kids. He always wanted to help me,” Saponari said. “It broke my heart when he died. It still does.”

During his short life, Dilly had a good friend in Saponari, like hundreds of others who had the privilege of meeting “Miss Moe.” Now, it is time for the community to discover a new friend in Sayre.

“It took a long time to make the decision to step down, but it feels much better handing it to Kami,” Saponari said.