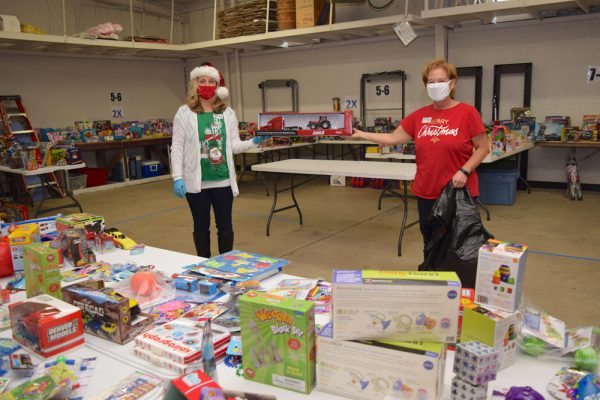 With coronavirus rules in place to limit the spread of the disease, volunteers Melissa Marotta, left, and Shirley Starey diligently wore masks and relied on social distancing to make sure area families in need would have Christmas presents for their children this holiday season. (Photo by D’Arcy Patrick Egan)

When Executive Director Maureen Saponari of The Salvation Army sat down with her loyal volunteers to map out a plan for this year’s Christmas campaign and Red Kettle Season, there was a sense of dread. Ottawa County is a friendly place, and filled with generous people, but the odds of successfully meeting the Salvation Army goal of $69,000 seemed an impossibility.

“Just like everything else in our COVID-19 world in 2020, we did not know what to expect,” said Saponari. Because of state restrictions due to the pandemic, Saponari was not able to host the popular Kick Off Breakfast, an exciting tradition that brings hundreds of The Salvation Army volunteers together to begin the Red Kettle Season; or to have the usual live Tree-A-Rama auction or to easily distribute toys, warm coats or bicycles to families in need.

“We realized quickly that we would not be able to find as many volunteers to fill the 1,565 hours of bell ringing, as in the past,” said Saponari. And extra volunteers would be needed to distribute Christmas presents to families, a one-day event that had to be stretched to five days to assure social distancing.

“It was a miracle!” said long-time volunteer Toni DeLuca of Port Clinton. “People were so kind, right to the end. In the last hours, they were stopping to donate, and our Secret Santa matched $5,000 in Red Kettle donations during the last four days of the Red Kettle Season.

“There was a grandma who put $100 in the Red Kettle, explaining ‘I am not traveling this Christmas (because of the pandemic), so here is the money I allotted for gas. I hope it makes someone’s Christmas a little better.”

For the Salvation Army’s volunteers, from the A-Team Advisory Committee to the couple ringing a Red Kettle bell to fill in on a Saturday afternoon, it was a miracle.

Amazingly, the $69,000 goal for the holiday season began to seem within reach. When Saponari did the final Red Kettle count — which included more $100 bills than had ever been seen before — the six-figure total was a staggering $100,175.62!

“So how did we manage to not only surpass our 2020 goal of $69,000, but with a new record we will probably never see the likes of again?” said Saponari. “It took an army of amazing volunteers and an equally-determined and strong-willed community.”

Saponari said the successful season amplified the Salvation Army’s motto: The World is changed by your example, not by your opinion.

“Our group of community members were relentless. They stepped up to ring the bell in the cold, rain, sleet and snow while smiling and singing through their masks,” she said. “It took a young widow dropping off a $100 bill just a few days after her husband passed, because ‘he loved you and what you do, and he would want me to do this!’”

Donors would call, text and email Saponari to let her know they were on their way to Walmart or Kroger’s and would be dropping their donation in the bucket. Or would be stopping at The Salvation Army office to donate, because they just didn’t know what to do this year, or how else to help.

“One of our long-time donors and bell ringers dropped off $200 in gift cards,” said DeLuca. “In lieu of Christmas parties, they donated money and gift cards to help others. From the bottom of our hearts, we give a big thank you to everyone in Ottawa County.”

DeLuca said it took team work and a group effort to surpass this year’s goal, made so much more difficult because of the pandemic.

“Ottawa County rocks!” said DeLuca. “But where would we be without the leadership of Maureen Saponari? She had multiple programs at Christmas running simultaneously, like the toy distribution, Tree-A-Rama, Coats for Families and the Red Kettles.

“Then there are the ‘Cool Kettle Chicks.’ All of us have a day to confirm ringers, check on them, take pictures and collect money. All of us, including Maureen, rang the bell when someone canceled. A big ‘thank you’ to Amanda Whitt, who did whatever was needed, and whenever it was needed.”

With a Secret Santa matching donations the last four days, said Saponari, with a wide smile, those two kettles provided a double-double donation for The Salvation Army. By putting others first, said Saponari, they were among those who made a difference in the community and, ultimately, the world.