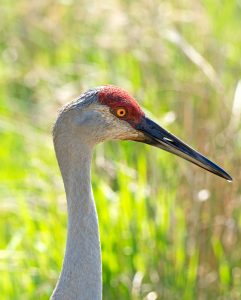 The first pair of sandhill cranes returned to breed in Ohio In 1987. In 2020, biologists estimated 58 breeding pairs and confirmed 25, producing upwards of 28 offspring.

The nasally bugles of a flock of sandhill cranes passing overhead is a sound and experience not soon forgotten. Thanks to monitoring and conservation work by the Ohio Division of Wildlife and partnering organizations, cranes can be sighted at Ohio’s wetlands and are once again breeding in the state.

In 1987, the first pair of sandhill cranes returned to breed in Ohio after they were extirpated from the Buckeye State. In 2020, biologists estimated 58 breeding pairs and confirmed 25, producing upwards of 28 offspring. The slowly expanding breeding population indicates the success of ongoing conservation work, but sandhills are still listed as a threatened species in Ohio. Much work remains until their awe-inducing calls are heard with regularity.

Sandhill cranes are a wetland-dependent species. During migration and the winter months they sometimes feed in agricultural fields but return to wetlands to roost at night. They breed in large, wet meadows or shallow marshes during the summer. Aerial waterfowl surveys have shown feeding flocks of up to 150 of these impressive birds. Flocks migrating overhead in a V-formation may number in the thousands. Magee Marsh (Ottawa County), Killbuck Marsh (Wayne County), Funk Bottoms (Wayne County), Killdeer Plains (Wyandot County), and Mosquito Creek (Trumbull County) wildlife areas are great locations to observe these birds.

Because sandhill cranes are dependent on high-quality wetland habitat throughout the year, conserving this space is key to ensuring their continued success. Gov. Mike DeWine’s H2Ohio program is one way that crucial wetland habitats are being created, restored, and protected. The H2Ohio program is bringing Ohioans better quality water in rivers, streams, and Lake Erie, as well as helping wildlife. Wetlands are important for filtering water, absorbing pollutants, managing flooding, and supporting wildlife.

Wildlife watchers can help track Ohio’s breeding cranes by reporting sightings of breeding pairs and their young to eBird or the Wildlife Reporting Website.

Ohio’s tax donation program is an important way for wildlife enthusiasts to help contribute to restoring and managing endangered and threatened wildlife and other species of interest. By making a tax donation to the Wildlife Diversity Fund on this year’s tax return, Ohioans are helping to ensure the future of Ohio’s ecosystems, from native habitats and landscapes to endangered plant and wildlife species.

Funds from the tax donation program go directly to projects that protect Ohio’s wildlife. Individuals may donate all or part of their state income tax refund by entering a dollar amount for “Wildlife Species” on line 26d of the 2020 IT 1040 tax form. Contributions made on the 2020 tax return and filed in 2021 are considered deductible donations made in 2021.