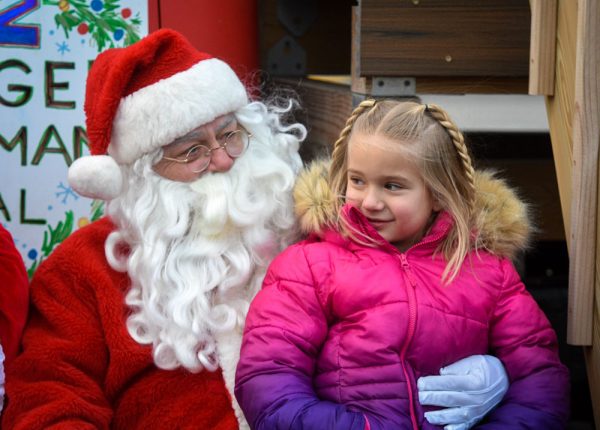 Since they first began to build Hopfinger Zimmerman Memorial Park in 2016, Jack and Lorraine Zimmerman have made many friends – the kind of friends who will go out of their way to help make the park a mini paradise for children. On Sunday, Dec. 18, one of their closest friends, Santa Claus, took a break from his busy work at the North Pole to fly to Port Clinton to greet the children who attended the 2nd annual Hopfinger Zimmerman Park Reindeer Days.

Mrs. Claus and Noel, one of Santa’s reindeer, traveled to the park with Santa , where they were joined by Ottawa County Sheriff Stephen Levorchick, many officers from his staff, and Bay Township Fire Department personnel. Together, they hosted a touch-a-truck event where kids could learn about police officers, firefighters, and the equipment they use to keep the community safe. 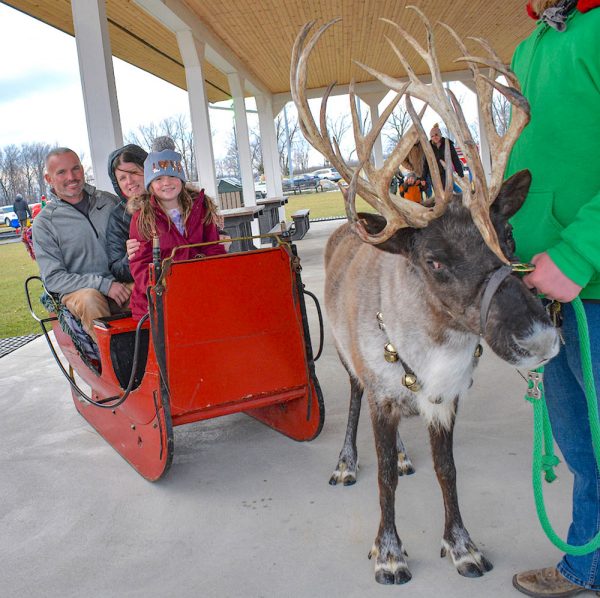 Brad, Rachel and Harper Chaffin, left to right, get their photo taken with Noel, one of Santa’s reindeer during the Hopfinger Zimmerman Park Reindeer Days on Sunday, Dec. 18. (Photo by Sheri Trusty)

“We like to help the park out. It’s always good for us to support them,” said Bay Township Fire Chief Dave Regal. “We brought an engine and a rescue truck, which is like a tool box on wheels.”

Brad and Rachel Chaffin and their eight-year-old daughter, Harper Chaffin, were among the many families who had their photo taken with Noel.

Before she visited Noel, Harper sat on Santa’s lap and told him what she wanted for Christmas.

“I want a real-life horse and a squeeze Gatorade water bottle,” she said. 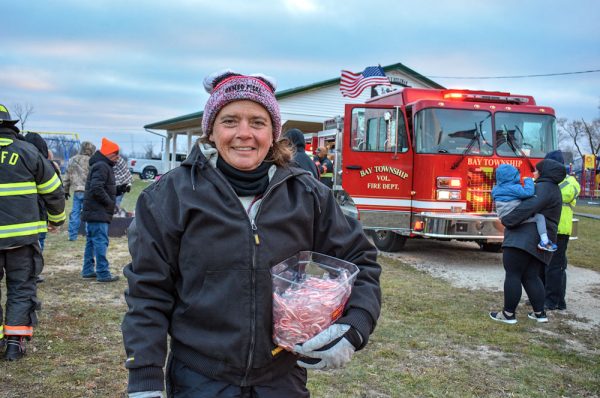 Lorraine Zimmerman and her husband, Jack Zimmerman, created Hopfinger Zimmerman Memorial Park to give families a free place to have fun. In the summer, the park is packed with people swimming, fishing, picnicking, playing basketball and pickleball, and letting their dogs run in the dog park. On Sunday, Dec. 18, the Zimmermans invited the community to the park to meet Santa and his reindeer. (Photo by Sheri Trusty)

Lorraine said she and Jack created Hopfinger Zimmerman Park because they had a dream to give families a free place to have fun, and they continue to build upon that dream every year. Last summer, they began construction on a sledding hill which will be ready for next winter’s Reindeer Days.

“It’s closed this year, no matter how much snow we get, because it isn’t safe,” Lorraine said. “It’s 35-feet-tall right now, and we want to make it a 50-footer. Next year, the sledding hill and an ice rink will open.”

The Zimmermans carried their dream of creating free fun for families into their plans for the Reindeer Days event, where everything was offered at no charge, including hot chocolate, cookies and cans of nuts.

What she failed to say was that no one gives more to create the magic of Hopfinger Zimmerman Park than she and Jack.

“It’s all from the kind graces of their heart,” said Bay Township Volunteer Fireman Mel McCord.