The 37th Tank Company in Port Clinton was comprised of 32 men from Port Clinton. On Sept. 1, 1940, it was re-designated as Company C, 192nd Tank Battalion. On the morning of April 9, 1942, members of Company C became prisoners of war by the Japanese after being captured on the Bataan Peninsula in the Philippine Islands.

Those Port Clinton soldiers became part of what is known as the Bataan Death March.

On a recent Monday, the cafeteria at the Bataan Intermediate School was filled with respectful students gathering to honor the 32 brave men from Port Clinton who participated in the Battle of Bataan and the Bataan Death March.

The students began this year’s annual tribute by singing the National Anthem while members of the Bataan Intermediate Bell Choir played, a group of 5th grade students read about the events, and a video about Bataan was shown. 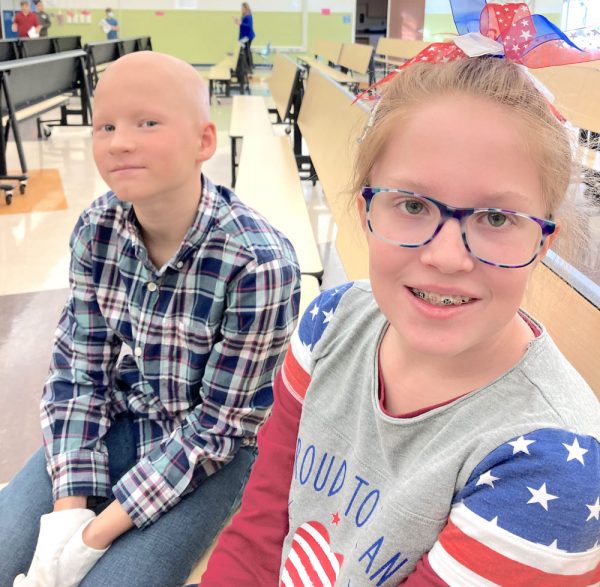 Griffin and Isabella share the importance of remembering the sacrifice of the men of the 37th Tank Company of Port Clinton. (Photo by Phil Wheeler)

The names of the Port Clinton soldiers who participated in the battle or lost their lives in the Bataan Death March or in a prisoner of war camp were read. Those students not in attendance watched on a remote feed to their classrooms.

The ceremony helps the students understand the history of their school name and realize the sacrifices made by these brave soldiers and others like them who fought, and continue to fight, for their country and our freedom.

Isabella Hill, 10, is a 5th grader and member of the Bell Choir.

“It makes me feel proud that I can help tell the story of what they did,” she said. “It is important for everybody to know what happened, and how the people have given us all the freedoms that we have.”

The ceremony is just part of the school’s overall program designed to keep the memory of the sacrifice these men made alive. The school incorporates a history lesson called “Lest we forget… The Story of Bataan” into their curriculum. A glass case in the main hall has memorabilia of the men and events.

“I’m proud of them, how they gave us our freedom, and how they fought for us. Like Principal Geoff Halsey said, they took every step until they couldn’t take one more step,” said 10-year-old 5th grader Griffin Miller. “It means a lot. I can’t believe they did that.”

As Major General Edward P. King Jr., the Commanding General Luzon Forces said in 1942, “Courage is a quality God has seen fit to dispense with utmost care. The men of Bataan were his chosen favorites.”