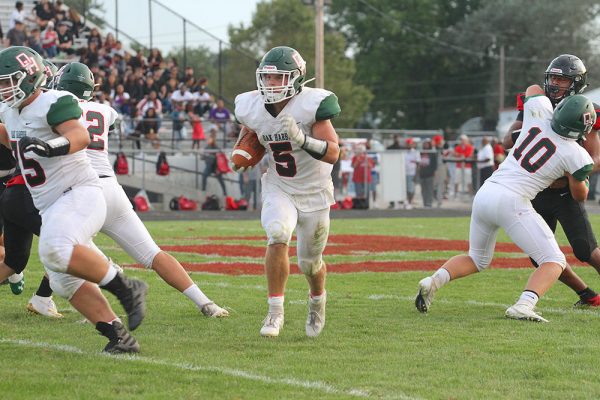 FOSTORIA — After failing to score in the game’s first 12 minutes, Oak Harbor put up a whopping 42 points in the second quarter in a dominating 49-12 victory over Fostoria. Rocket running back Clay Schulte scored five touchdowns (three rushing, one receiving, one fumble recovery) in the quarter as Oak Harbor (1-0) took control of the game. 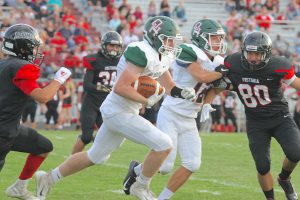 Schulte’s first score came on a 12-yard pass from Jac Alexander, and he followed with three touchdown runs (4, 43, 17) and a fumble recovery returned for a touchdown from 20 yards out. Alexander connected with Gage Brough from five yards for the sixth touchdown of the quarter.

“Early on, the first quarter was back-and-forth. We made some mistakes turning the ball over, and we had some missed tackles,” said Oak Harbor coach Mike May. “But we scored 42 points in the second quarter to put the game away. I was happy the guys handled the adversity so well.”

“Clay made a lot of plays in the second quarter to break the game open, and had nine of 10 tackles, making plays on the both sides of the ball,” said May. “Jac did a nice job running our offense. He’s very efficient. We rely on his decisions on offense.” 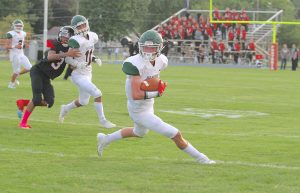 “I think the offensive and defensive lines are the key,” said May. “You could see our offensive line was playing very physical. That wears down your opponent. I think that’s what happened in the second quarter. Our defensive line took over the game.

“We were concerned going in with all the athletes Fostoria has. But our defensive line was able to get good pressure on the quarterback. Our linebackers and defensive backs played really well, too. For the most part, we were able to shut them down.”

The second half, meanwhile, saw Fostoria (0-1) get on the board in the third quarter when Avondre Reed caught a 42-yard touchdown pass from Dominique Settles. Oak Harbor’s Gannon Duty caught an 8-yard touchdown pass from Colin Ish early in the fourth quarter and Settles scored on an 11-yard run midway through the fourth for the Redmen.
On Friday, Oak Harbor faces Genoa in the 100th Anniversary Celestial Bowl. The Comets have won the last three games in the rivalry.