Schulte shining at LB for the Greyhounds 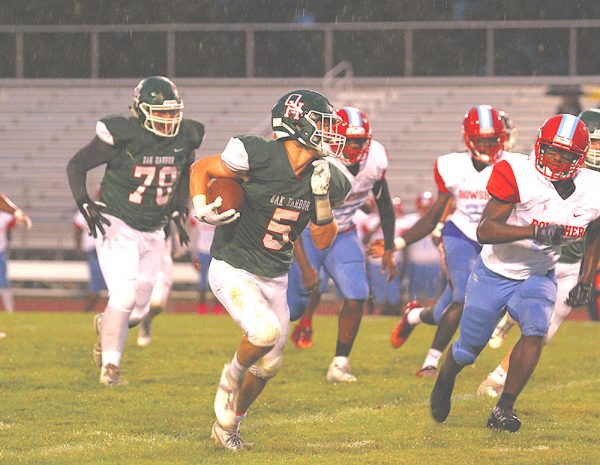 Clay Schulte on the run for Oak Harbor High School.

Just like he did at Oak Harbor, Clay Schulte is making his presence felt on the football field.

The sophomore linebacker just finished up his first full season for the Indianapolis Greyhounds, registering 34 tackles, good for sixth on the team, despite the fact that Schultz missed three games due to a concussion.

“My role this year was to come in on third downs, we had a package, and I came in to blitz and get after the quarterback,” Schultz said. “I played a little bit at outside linebacker, and special teams the whole year.”

Indianapolis, which is a Division II school, finished 7-4 and 5-2 in the Great Lakes Valley Conference.

Three of the Greyhounds’ losses were by three points apiece, including a 19-16 loss in double overtime to Ohio Dominican. The other loss was to Lindenwood, 28-20.

“We were right on the verge of the playoffs — a couple plays made the difference. We were right there, most of the games we were up in the second half,” said Schulte. “We couldn’t put some teams away that we should’ve put away.”

Schulte is confident that the Greyhounds will get over the hump next season.

“We’ve got a lot of guys coming back, and we had a lot of young guys that will be back,” he said. “Our running back (Toriano Clinton) will be returning. He was first in the country in rushing yards until he got hurt and missed our last three games. He’s returning next year, and he’s a great player.”

There are about 5,500 students at the university, approximately 4,000 undergraduates.

“I’ve made a bunch of friends here — all the guys on the football team are good guys and easy to get along with,” said Schulte. “It’s mostly athletes here on campus, so you always see people that play sports, you talk to them and see them around.”

Schulte comes from a family filled with athletes. His father, Scott, who is an assistant coach with the football team, was the all-time leading rusher at Hillsdale College in Michigan when he graduated. Hannah, his sister, just earned All-Ohio honors for her efforts on the soccer team. She finished her career with 103 goals, four short of the school record, and will continue her career at Wheeling University in West Virginia, which is located 59 miles southwest of Pittsburgh.

“Hannah puts in a lot of hard work. She’s got a drive just like everyone else in our family,” he said. “She had an amazing career, and I’m super proud of her. She’s got a work ethic just like mine. She’s always running and doing soccer drills with my dad. She’s worked hard for what she’s got. She’s very deserving of that honor.”

Scott Schulte has been instrumental in the success of his children.