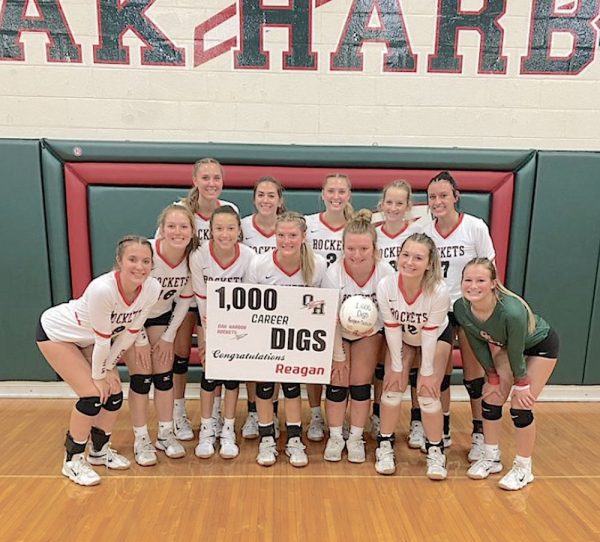 The Oak Harbor senior is in the midst of a great season starring for the Rocket volleyball team, and has already written a fantastic legacy for herself.

Led by Schultz, Oak Harbor is currently 11-1 and 2-1 in the Sandusky Bay Conference Bay Division, has six seniors leading the way and is hoping to make this a special season.

Schultz currently holds four school records, and is the only player in school history to register 1,000 digs. She broke the school record for career aces last season, a mark held by Olivia Rahm, now an assistant with the team. Schultz also holds the record for digs in a season (394) and assists in a game (58).

“I’m having a lot of fun,” said Schultz. “I started volleyball in biddy, so I’d say around fourth grade is when I started playing. I love how this sport is team-driven and how everyone has to chip in to succeed.”

“I did know the record was coming,” Schultz said. “After I broke the dig record, we saw that I was really close to 1,000. For me, it’s not all about the individual records. Those are nice to have, but it’s about how the team is doing. That’s what I’m working towards.”

Schultz is joined by five fellow seniors who have led the way for a team looking to make noise in the Bay Division and in the postseason. Those seniors are Ryann and Riley Steinbrick, Grace Wolf, Breanna Bowlick and Jaycee Snyder.

“The team is driven by passion,” Schultz said. “All the six seniors are really close. We do it for each other, for the seniors, and we push through. It’s our last year of ever playing volleyball, it’s all we have left, so let’s give it what we’ve got.”

She also credits her coach, Jackie Gezo, for her efforts.

“Coach Gezo is very respectful, very fun to be around. She always pushes us to be our best,” Schultz said, “but also have fun while we’re doing it.”

Schultz is also an elite softball player. Last year, she committed to play shortstop at Kent State University. She is the starting pitcher for the Rockets, and a great hitter.

“I’ve been playing softball when I was 4, and I started the travel process when I was 7. I used to watch Michigan softball games on TV. I just went to Kent and fell in love with the coaches and the campus.”

Her father, Brian, has been an assistant with the softball team for four years. He and his wife, Shelly, are both Oak Harbor graduates.

“My family has always been my biggest fans. They support me after every game, win or lose. My mom is always there for me if I’ve had a bad game, and my dad has always given me constructive criticism,” Schultz said.