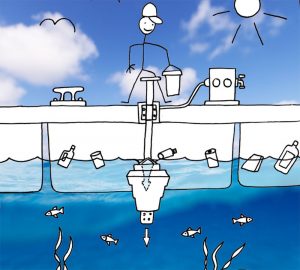 This SeaBin illustration shows how water is sucked in from the surface and passes through a catch bag inside the Seabin, with a submersible water pump. The water is then pumped back into the marina leaving litter and debris trapped in Seabin catch bag.

“Our exciting new collaboration with KOB and Ohio Sea Grant enables ODNR to use new technology to continue our efforts to protect the waters of Lake Erie,” said ODNR Division of Parks and Watercraft’s Chief Glen Cobb. “Not only will boaters benefit by the removal of litter and debris, but cleaner waters are critical for all users.”

An Australian product, the Seabin works 24/7 to skim and collect marine debris from the water’s surface, as well as filter out gasoline, oils and microplastics from the water. Each device can remove up to 1,000 pounds of marine debris a year, which will mean that when all four devices are operational in the Lake Erie watershed, those devices will have the potential to remove 4,000 pounds annually, which is the equivalent weight of an average camping trailer.

“Until now, all of our work has only been able to prevent microplastics in our waterways, so we are thrilled to be making an effort to actually remove microplastics from the water,” said Michael Mennett, Executive Director for KOB. “We’re grateful to Keep America Beautiful and to our partners who will be maintaining and recording Seabin data to make this trailblazing project possible.”

As part of the grant, marina staff at four Seabin sites will document the amount and types of litter collected so that the data can be analyzed. Two Seabins will be located in Ohio at the Geneva Marina in Geneva and Mentor Harbor Yacht Club in Mentor. An additional two will be placed at Ohio marinas located near Huron and Lorain.

Seabins have been used in Australia, Europe and Asia for years. KAB selected three local affiliates to introduce the Seabin devices in the United States. KOB was chosen for its vicinity to Lake Erie as an inland lake pilot project. Keep Hanover Beautiful will be testing the devices along the ocean and Keep the Tennessee River Beautiful will be testing them along an inland river.

KOB will be compiling the litter data reported by each site and using the data to identify litter trends and sources so that steps can be taken to stop litter flow into Ohio waterways.