Sen. Randy Gardner was elected the Majority Floor Leader of the Ohio Senate on Monday. On Wednesday, Gov.-elect Mike DeWine changed all of that, appointing Gardner to his cabinet as Chancellor of Higher Education.

The appointment ended Gardner’s 33-year career in the Ohio Legislature.

“After all of those years in the Ohio House and Senate, the statehouse has been like a second home for me,” said Gardner, by telephone on Thursday. “But the fact of the matter is, I probably would have been able to serve no more than the next two years in the Senate because of term limits, and it was unlikely I would run again for a seat in the Ohio House.”

Gardner said he has been chairman of the higher education subcommittee for the last eight years, and the cabinet post as Chancellor of Higher Education was a perfect fit for him.

“I believe work force programs and colleges and universities extremely important for Ohio’s future,” said Gardner. “If we are going to grow Ohio, a strong higher education system and work force development programs need to be a priority.”

Gardner still cares deeply about Lake Erie, and was happy DeWine has endorsed the Clean Water Bond issue for Ohio.

“Higher education is deeply involved in the protection of Lake Erie,” said Gardner, “We are funding research programs at Ohio State University’s Stone Laboratory. Toledo, Bowling Green and so many Ohio colleges and universities are doing research on Lake Erie and Sandusky Bay. That must continue.”

Gardner will be replaced in the Senate by the Senate Majority Caucus, filling a term that runs through 2020.

During his tenure in the House and Senate, Gardner has never missed a vote. Since 1985, he has amassed 10,423 consecutive roll call votes on bills, amendments and resolutions. He was preparing for his 20th year of service to elected leadership positions in the General Assembly, more than any other Republican in Ohio history.

Gardner has served as Speaker Pro Tem of the Ohio House and President Pro Tem of the Senate before being elected Monday, 28-0, as Senate Majority Leader. 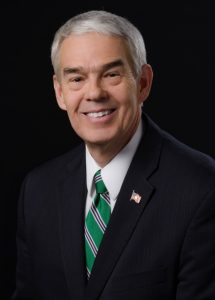