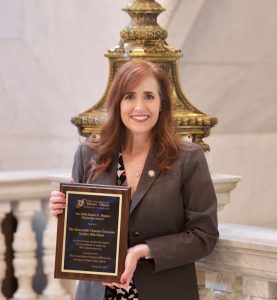 State Senator Theresa Gavarone, whose 4th District includes Ottawa County, was named the Legislator of the Year by the Ohio Association of Election Officials.

“I’m grateful to Ohio’s election officials for choosing me to receive this award. Elections are a critical part of government as they provide voters with the right to have a say in who represents them and to hold these individuals accountable,” said Gavarone.

The award is given annually to one Republican and one Democrat who have demonstrated a high interest in election policy, have had significant influence on elections legislation, and have worked closely with local election officials to craft meaningful election reforms.