COLUMBUS — State Senator Randy Gardner was unanimously re-electedto another  two-year term as Senate Majority Leader by  the SenateRepublican Caucus, which convened last week to elect its leadership team  for the 2019-2020 legislative session.

“I am excited to be entrusted to serve in majority leadership for the next two years,” Gardner said. “Yet I know that without the votes and support of the people in northern Ohio, I would not have the opportunity to go to work in the state capital.”

Gardner serves as chairman of the Lake Erie Caucus and represents Ottawa, Wood and Erie counties and parts of Fulton and Lucas counties.

“Even though Ottawa County is about 10% of my Sen– ate district, I spend about 30% of my Senate time there,”  Gardner said. “There are real challenges that will continue to merit our attention in Ottawa County, such as  Lake Erie, Davis-Besse, the opiate crisis, respecting lo- cal governments and several key education issues.

“Ottawa County has given me substantial support over the years. It’s an honor to work for the county in Columbus.” Gardner has held seven leadership positions in the House and Senate during his service in the General  Assembly and has served for 19 years in elected leader– ship, the most of any Republican member of the legislature in Ohio history.

“Randy brings a wealth of public service experience to the leadership team,” said President Obhof. “Randy has a keen grasp of the issues. He understands how to make government work responsibly and efficiently for the people in his district and around the state.” Gardner has maintained a 100% voting record on bills, amendments and resolutions in the House and Senate – more than 10,300 consecutive votes.

In addition to his leadership position, Gardner  serves as chairman of the Higher Education Subcommittee and is a member of the Health, Human Services  and Medicaid Committee, the Energy and Natural Re- sources Committee and the Senate Education Committee. 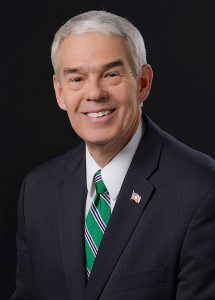