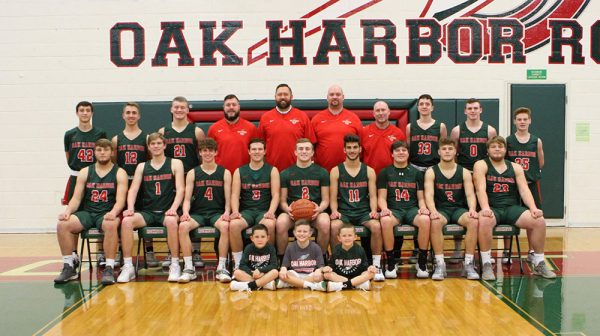 Forecast: To say that Oak Harbor has a lot of seniors on its team would be an understatement.

The Rockets have nine seniors and return four starters for a team that is looking to compete for a league championship and make a postseason run.

A number of players were not practicing because the football team had advanced so far into the playoffs, presenting a challenge for Eric Sweet.

“It’s a different challenge, but an exciting challenge. I know a lot of coaches that have had success in football and that’s carried over into the basketball season,” said Sweet. “We have to navigate and make sure everyone is healthy. It’s exciting to have this success in football.

“We have 12 kids in the gym right now. We have to slow down and go back to the basics. It’s been difficult at times, but the guys I have on the court have been phenomenal.”

Senior point guard Jac Alexander (5-10) will lead the offense and is coming off a tremendous season, one that saw him average 21.5 points last year. Joining him in the backcourt will be fellow senior Clay Schulte (5-10), a four-year starter who averaged 9.2 points and 6.8 rebounds.

Some other seniors that will likely see playing time are 6-4 twin posts, Will Dowling and Gabe Dowling, and 5-10 wing Tyler May. Three more senior wings — Anthony Stewart, Buddy Nuhfer and Collin Ish — will also battle it out for playing time. Junior posts Ryan Ridener and Collin Fauver could also see varsity action.

“I’m excited this year because we have some pieces that are going back to their natural positions,” said Sweet. “Last year, we had to rotate kids where they weren’t 100% comfortable. Two years ago, Clay was phenomenal at the top of our zone, but we had to move him around last year. I feel like we have a group of kids back in comfortable positions.”

Sweet credited Brennan Ish for his play at point guard thus far, and notes that Max Hallett-Szymanski and T.J. Hallett could also see action at the varsity level.

“Those three guys, I would expect them to compete at the varsity level and also get some JV minutes,” said Sweet.

It should be another competitive season in the Sandusky Bay Conference’s Bay Division.

Sweet talked about the goals for his team.