A 32-foot Boston Whaler is a boat that has been doing dypouble duty over the last decade by the Ottawa County Sheriff’s Department, patrolling pleasure boaters on the wide waters of Lake Erie and helping Homeland Security keep an eye on the border.

The hard-working craft had begun to show its age last year.

Travis Schwinkendorf of Coastal Yacht Detailing in Port Clinton and Josh Terry’s of Terry’s Marine Service in Marblehead did a wonderful job of sprucing up the black-and-grey center console powered by a couple of 300-horsepower Mercury outboards.

“Travis and Josh took it upon themselves to do the job, and they did it for free,” said Sheriff Stephen J. Levorchick. “They felt it was their civic duty and, despite all of the wear and tear, it now looks like brand new.”

The boat did have some cosmetic issues, acknowledged Schwinkendorf.

“My crew had to go after that hull with a vengeance,” he said. “There was plenty of sanding to be done, both inside the boat and on the hull. That hadn’t been done since it was purchased in 2008.”

Schwinkendorf estimated the kid glove treatment would have approached $3,000. And it was done ‘by marine experts, rather than prisoners at the county jail. He had another surprise for Sheriff Levorchik. Schwinkendorf announced his crew would also make regular stops at the boat’s dock at Gem Beach Marina all summer to wash the boat for free, a $1,000 bonus.

“With the boat so visible to the many visitors throughout the year, we wanted to make sure the Ottawa County Sheriff’s Department put its best foot forward,” said Josh Terry. “There were a lot of little things we’ve done that will make a big difference on the water this summer. It was gift to the taxpayers we were glad to make.”

The boat is funded by a state grant from the Ohio Department of Natural Resources’ Division of Watercraft and a federal grant from the Homeland Security’s Stonegarden Operation, said Zach Bowling, Captain of Operations for the Sheriff’s Department. 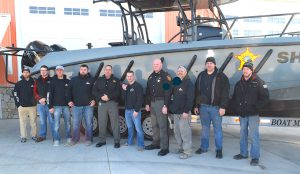 The whole gang showed up to celebrate the new face put on the Ottawa County Sheriff’s Department patrol boat. The 10-year-old Boston Whaler was spruced up by the experts at Coastal Yacht Detailing in Port Clinton and Terry’s marin Services in Marblehead. (Photo by D’Arcy Egan)