Lake Erie ice anglers hoping for a last gasp chance at catching a stringer of walleye on Saturday morning, March 9, were lucky to escape the suddenly shifting ice, relying on the fast action of first responders, a fleet of airboats and a couple of Coast Guard helicopters from Detroit to get back to shore.

No one was seriously injured and there were no reports of missing anglers. Air boats and helicopters toured the ice floes to make sure no fishermen were left behind.

“We estimated there were at least 100 to 150 fishermen out on the ice off the west side of Catawba Island, perhaps more,” said Chief Warrant Officer Bethannie J. Kittrell. “When the ice began to shift just after 8 a.m., a small crack in the ice turned into a wide patch of open water.”

As southwesterly winds picked up, quick thinking fishermen raced back to shore and at least a few swam across the ever-widening open water gap between ice floes. Forty-six anglers had to be rescued, abandoning their shanties, ice augers and fishing tackle for a ride in an airboat or helicopter.

A special mobile app recently put in place by the Ottawa County Sheriff’s Department also notified everyone who had installed the free app of the rescue attempts at about 8:30 a.m., according to reports from Sheriff Steve Levorchick.

Four Coast Guard helicopters from Detroit and Traverse City, Mich. picked up anglers took them to the Catawba Island Fire Department. For wet, cold fishermen possibly suffering from hypothermia, a fleet of emergency vehicles and EMT officers were waiting there, and at Catawba Island State Park.

Oddly enough, walleye fishermen along the west side of South Bass Island just to the north continued to fish for walleye on Saturday morning. In that area, Green and Rattlesnake islands help to keep the Lake Erie ice pinned against South Bass Island.

With rain, gusting winds and rising temperatures in the Saturday evening  forecast, the Lake Erie ice fishing season is most likely over for this winter. 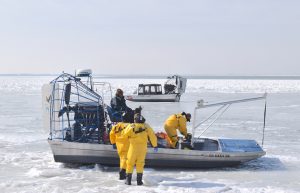 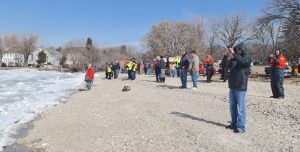 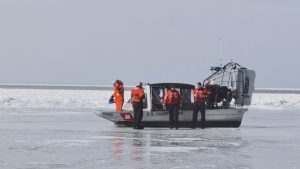 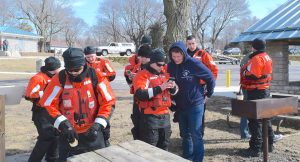 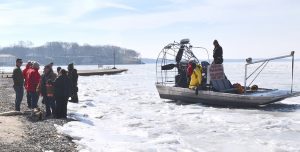