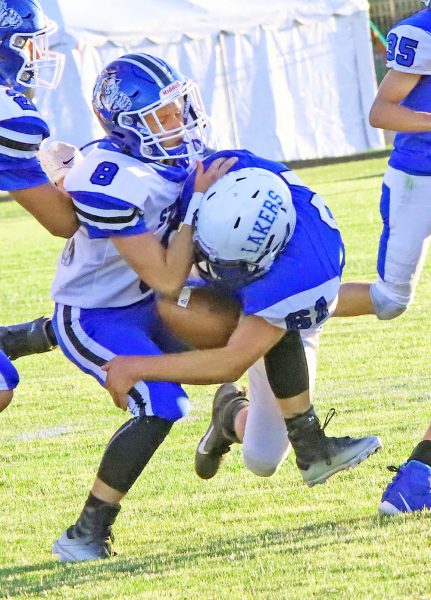 The Danbury Lakers overwhelmed the visiting Stryker Panthers on Friday night, helped by this fumble-causing tackle of Tyler Damms by Danbury’s Brandon Wunder. The Lakers booste their record to 2-0 with the 58-12 victory. (Photo by John Kozak)

DANBURY TWP. — From the start, it was obvious that Danbury was the superior team.

The Lakers (2-0, 1-0 Northern 8 Football Conference) scored on the first play from scrimmage when Cole Shortridge ran 60 yards untouched for a touchdown and the rout was on. When it was over, Danbury had scored eight touchdowns and 26 points in the first quarter in the 58-12 victory.

Quarterback Kaden Conrad connected with Shortridge on a 47-yard touchdown on the Lakers’ second possession to make it 14-0 following a two-point conversion with 8:52 remaining in the first quarter.

The Lakers were up 20-0 after Cade McCarthy broke a tackle and rambled for a 76-yard touchdown, racing down the left sideline and turning it up the middle. Danbury effectively put the game out of reach when Conrad and Shortridge hooked up for a 24-yard touchdown pass with 3:57 to play in the quarter to push the lead to 26 points.

“I think they believe in themselves and what we’re doing. That’s extremely important. We have buy in across the board,” said Danbury coach Keith Mora. “We didn’t have a player with more than 10 touches. It’s a bunch of guys that are playing their roles. Defensively, they’re swarming to the ball right now. It’s a veteran group and they understand their respective jobs.”

“Kaden’s got composure. He has been starting at quarterback for the better part of his career. We’re going to come up against a team that is composed and he has to distribute the ball. We don’t need Kaden to run the ball for 150 yards, just make the right reads and make the right choices.

“We told Cole before the game, this is crazy because I don’t think the other team has circled you on their film. We had a talk about it before the game. He could put those questions to sleep,” said Mora. “We told him, ’You’re supposed to be our workhorse and you’ve got 31 games under your belt. Go be the back we know you can be.’ Running and catching, he was a force on both sides, a testament to how well he’s played.”

McCarthy finished with eight carries for 79 yards and a touchdown while Will Tibbels carried the ball eight times for 59 yards and a score.

“Cade and Will are both excellent compliments to Cole. Cade is definitely someone that teams haven’t circled on film. He had 79 yards rushing and had one unbelievable run,” said Mora. “In week one, he put the team on his back in the third quarter. For Cade, he’s someone who’s quiet, he goes to work, and he’s deceptively fast and shifty.

“Will is probably faster than Cole and Cade. If we can get him the ball on the edge, defenses have to adjust to him. Cade and Will are both excellent compliments to Cole.”

The unsung heroes were on the offensive line, opening holes for the running backs throughout the game.

“They’ve put together two solid weeks. We could always find errors when we look at the film, but at the end of the day, we’ve been moving the ball pretty well,” said Mora. “They’re creating good holes for our backs. D.J. Webster is a big problem for defenses. We like to get up behind him and run, and Brandon Wunder does a nice job as a center. Connor and our tight ends have to be able to seal the edge.”

Mora praised the defense, which allowed just one yard rushing.

“We’ve had two good defensive weeks. I want to say we gave up 197 yards of total offense on Friday, and I believe 196 were through the pass. We’re a run-stopping defense. We’ve done a good job of doing that the past two weeks,” said Mora. “We haven’t given up 100 yards rushing in two weeks. I know giving up that last touchdown stung a little bit. We want teams to have to find pass plays that are going to work against us.”

This Friday, the Lakers host Holgate, which is located 13 miles east of Defiance. The Tigers are coming off a 50-44 victory over Toledo Christian.

“They’re tough. They’re a heavy-run team. We saw them in the scrimmage,” said Mora. “It’s a group of guys that went undefeated last year. They’re a hard-nosed team that runs the ball well. We want to stop the run, and they want to run the ball.”