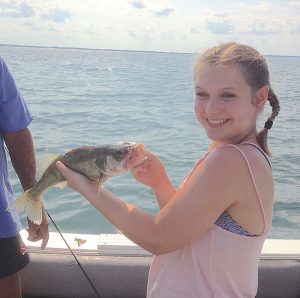 The Shrock’s Marina Walleye Tournament is a family affair, with no restriction on the number of anglers on a team. Family and friends are also encouraged to watch the weigh-in, which begins at 3 p.m. on July 14. (Photo by D’Arcy Egan)

Shrock’s Marina and Marine Rescue in Marblehead have opened registration for their 7th annual Walleye Fishing Tournament, a casting-only event on Sunday, July 14 created to benefit the local Danbury Fire Department. The tournament is a family friendly contest the features a popular after-party hosted by the Hidden Beach Bar at Shrock’s Marina.

“We really want this to be considered a fun tournament, which is why we encourage participants of any age and skill level,” said Shrock’s Marina owner Jake Dunfee.

A unique aspect of the Shrock’s Walleye Tournament is that there is no limit to the number of fishermen who can participate on a single team. With a $65 per fisherman entry fee, there is fun to be had for the entire family!

The annual tournament will roar into action on July 14 with an official “lines wet” announcement at 7:30 a.m. Fishermen and their walleye are due back at Shrock’s Marina by 3 p.m.

The six longest walleye will win the tournament, with additional prizes for longest yellow perch and longest “other.” Friends, family and the general public are welcome to watch the public weigh-in and team rankings at Shrock’s Marina.

The culmination of the weigh-in will kick-off the popular after-party, hosted by Hidden Beach Bar. Smoked BBQ, drink specials, high-end raffles and live entertainment provided by The Junk all make the after-party an must-attend event.

More than $3,000 was donated to the Danbury Fire Department after the 2018 event. With the 2019 registrations starting to arrive, everyone at Shrock’s Marina is looking forward to another sizeable donation to such an honorable department that serves residents and tourists alike.