Sister ministered to people of all ages at Immaculate Conception Parish, meeting them wherever they were on their faith journey. She not only oversaw the baptisms of the very young, but also ran the Parish Religious Education Program for Grades 1-6, which included the planning and preparation for the sacraments of First Reconciliation and First Holy Communion. 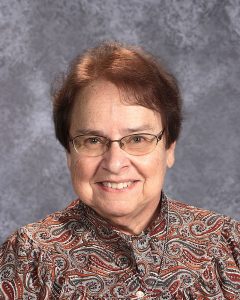 Sister Marilyn Ann provided the leadership for youth in the 7th and 8th grades as they further committed themselves to the Catholic Faith through the sacrament of Confirmation. Sister’s dedication to helping those learn more about the Catholic Faith was not limited to children.

Sister Marilyn ran the parish Rite of Christian Initiation for Adults (RCIA) program which serves as the guiding light in bringing people to understand fully the teachings of the faith and ultimately their becoming a full, active member of the Catholic Church. Sister served as a facilitator in both the Ave Maria Study Club and in the parish’s Altar Rosary Society.

Sister Marilyn Ann is a sister of Notre Dame of Toledo. The Sisters of Notre Dame of Toledo are apostolic women whose mission is to proclaim God’s goodness and provident care through lives of service. The Sisters of Notre Dame are dedicated to education in all of its forms, often working in schools, parishes, hospitals and reaching out to the poor and oppressed. Teaching has been a passionate life calling for Sister Marilyn. She began her career in 1970 teaching first grade in Bellevue, Maumee and Toledo. She then became the principal of St. Mary Parish in Norwalk, Ohio.

Returning to Toledo, Sister taught Kindergarten and Preschool students at Ladyfield, a Sisters of Notre Dame School. She held the positions of high school treasurer, senior religion teacher, and spiritual direction/retreat program coordinator at Notre Dame Academy High School in Toledo. Sister cared for toddlers and babies at the Maria Early Learning Center in Toledo before returning to Bellevue to teach second grade. Marilyn served as principal of St. Joseph School in Monroeville, Ohio. She taught first, second, and third grade at Lial School in Whitehouse, Ohio where a non-graded continuous progress method of teaching is practiced. She stayed at Lial School to be a team leader.

Returning to the classroom, Sister taught second grade at St. Mary Parish, Clyde, Ohio followed by Immaculate Conception Bellevue and the Maria Early Learning Center in Toledo. She later served as the Assistant Secretary to Provincial Secretary for the Sisters of Notre Dame Provincial House in Toledo.

Sister Marilyn came to Immaculate Conception Parish in Port Clinton in 2014 as its Faith Formation Director, where she has influenced the lives of many.

A reception and spaghetti dinner followed Mass at the Denny Bergeman Knights of Columbus Hall. Sister Marilyn expressed to her many guests the fact that they are her heart and she carries the parish family with her on her journey.

The parish of Immaculate Conception thanked Sister Marilyn for her beautiful service and for leading and teaching so many who now hold their faith dear. She has certainly proclaimed God’s goodness and shared her love of her Lord with many.