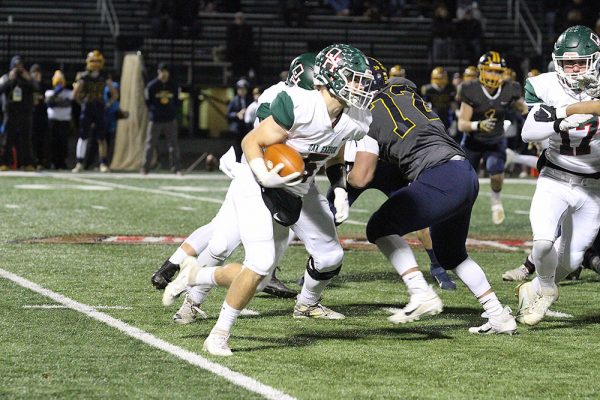 This season, Oak Harbor added to its illustrious history with a 13-1 record, its third regional championship and the second of back-to-back Sandusky Bay Conference Bay Division titles.

The Rockets advanced to the Division V state semifinals before losing to Kirtland, 28-14. The Hornets won the state championship with a 17-7 win over Ironton.

Oak Harbor was rewarded for their efforts as six players earned All-Ohio honors.

Rocket quarterback Jac Alexander earned first-team honors and set school records by completing 94-of-154 passes for 1,743 yards and 24 touchdowns and two interceptions. He was a force on the ground as well, carrying the ball 177 times for 1,429 yards and 20 touchdowns. Alexander holds every major passing record at Oak Harbor and leaves as the most decorated quarterback in school history.

Fellow senior Gabe Dowling earned All-Ohio honors and was named to the offense’s first team while Clay Schulte earned first-team honors at linebacker. (Last year, he was named to the defense’s second team.) Schulte finished with 183 tackles this year and seven sacks. He holds the career record for tackles and graduates as the most accomplished defensive player in school history.

Schulte was also a decorated running back and led the team in rushing with 178 carries for 1,470 yards and 33 touchdowns. He also caught 35 passes for 638 yards and 10 touchdowns.

Tyler May was named to the offense’s third team for his efforts. May, who missed much of last season with a broken collarbone, caught 40 passes for 796 yards and 10 touchdowns, setting school records in each category.

Jordan Arnold was named to the third-team defense, finishing with 83 tackles and 10 sacks, and Will Dowling earned special-mention honors as an offensive lineman.