’Skins will have a late start to the season 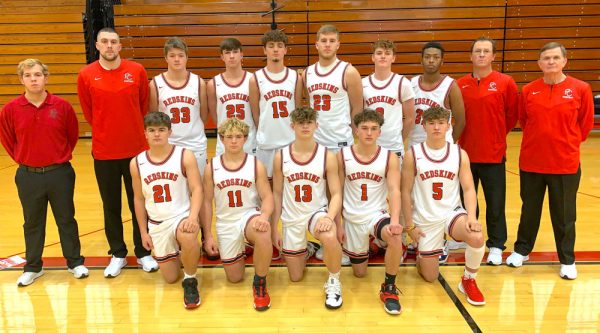 The Redskins are just getting back five players due to the football team’s deep playoff run, but it’s a talented, capable group, nonetheless.

Leading the way is 6-3 junior forward Adam Thorbahn, who has been arguably the best player on the team since his freshman year. He averaged 14.6 points per game last year.

He is one of the football players just returning, as is 6-1 post Josh Hurst, 5-8 point guard Tyler Webb, 5-9 guard Cam Gillum and 5-8 guard Owen Auxter.

“I think it’s an advantage for those kids to have an extra month of skill development,”he said. There are definitely some positives we can take from it.”

Thorbahn is joined in the post by Hurst. Webb is the point guard, Brayden Spencer is a 5-10 wing who averaged 5.3 points per game, and the other spot in the starting lineup will go to Jackson Beasley (5-10) or Nolan Chambers (5-8).

The other member of the rotation is 5-11 guard Sy Nickloy.

“Brayden and Jackson have taken some big strikes, Sy has been in the gym basically the entire time with us,” said Hicks. “We feel like we’ve got nine guys that can contribute and play big minutes every game.”

Last year, the ‘Skins lost 10 games by five points or less, so the smallest of improvements could lead to the biggest of gains this season. Port Clinton went 7-16 and 3-7 in the Sandusky Bay Conference Bay Division last year, defeating Fostoria before falling to Toledo Central Catholic in the sectional finals.

“The expectations are high. We return most of the guys that we had last year, and we had a solid JV team,” said Hicks. “I think this is the year where we can flip the win-loss record the opposite way, and win more than we lose. We play with the confidence that we can win any game that we play.”

Thorbahn is the only player taller than 6-1.

“I think we have a strong league. I think they’re expecting to be there the last couple of weeks competing to win a conference championship,” said Hicks. “Huron, Margaretta and Willard are bringing good players back. Man for man, I think we’re just as good as anyone in the league. We’re going to expect to compete and expect to beat those teams every time we play.”