Skoufos is Player of the Week following a great defensive performance 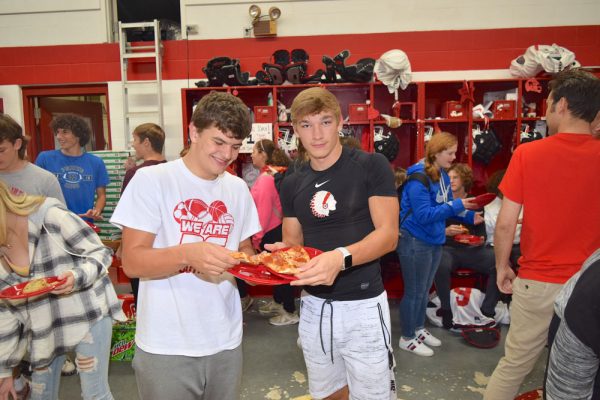 Port Clinton football players Cam Gillum, left, and Demetrius Skoufos were stars of the 42-7 victory over Oak Harbor recently, earning both some free pizza compliments of Mayor Quinton Babcock. Skoufas was also named The Beacon’s Player of the Week after the game. (Photo by D’Arcy Patrick Egan)

The junior’s interception, which came with the Redskins leading 21-0, was followed up by a 40-yard touchdown pass from Cam Gillum to Tyler Webb on the very next play to push the lead to 28 points and effectively end any shot the Rockets had at getting back into the game.

The interception by Skoufos was returned 40 yards and thwarted a Rockets drive that reached the Port Clinton 25-yard-line. The pick gave the ‘Skins the ball at the Oak Harbor 40, and Gillum found Tyler Webb deep on the next play for a touchdown with 36 seconds to play before the half.

Skoufos also had a sack on fourth down that stopped the Rockets’ second drive, which reached the Oak Harbor 19.

“After the first two drives, we made some different calls,” said Skoufos, who says he has played football for five years. “And we kind of figured out their defense. They had a whole new offense than what we practiced against, and we adjusted.”

He also had to fill in when the starting outside linebacker was unable to play.

“It was awesome,” Skoufos said. “I stepped up and I had the opportunity.”

The ‘Skins have lost just one game all season.

“It’s been a blast having a winning season,” he said. “Josh (Hurst), Tyler (Webb), Cam (Gillum), Garrett (Cornell) — to have people to step up is so important. We just have some really good chemistry, and a really good connection with everyone.”

“I’m just trying to get as far as we can,” Skoufos said. “State is a far goal, that would be awesome, and we just have (that) goal. We are SBC champs now, so I guess the answer would be to see how far we could make it in the playoffs.”