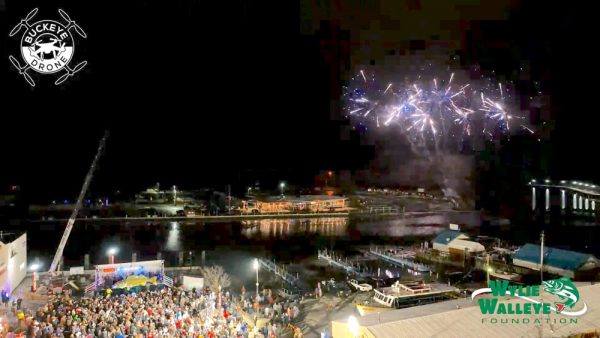 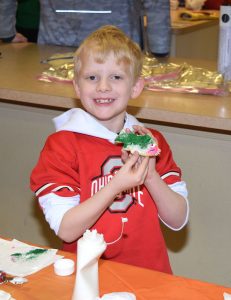 The Minnow Drop at the Knights of Columbus Hall in downtown Port Clinton was all fun and games for an afternoon crowd of boys and girls. There was plenty for the youngsters to enjoy, from hula hoops to coloring books, a bubble machine and a wide variety of games. Especially popular was decorating — and devouring — lots of cookies. (Photo by D’Arcy Patrick Egan)

You just never know what the weather will bring to the New Year’s Eve celebration in Port Clinton. After all, it’s winter, so the volunteers at the Wylie Walleye Foundation planned for the worst and hoped for the best Walleye Drop celebration last Saturday night.

A warming trend was welcomed for the weekend, especially after a spate of bitter winds and frigid temperatures just a week ago. But the more pleasant weather also provoked a dense fog along the Lake Erie shoreline on Saturday afternoon.

Would Wylie the Walleye be allowed to drop in at midnight? Would crowds be on hand to watch? Would Buckeye Drone be airborne to chronicle the event? Would the fireworks show be allowed to greet 2023 at midnight?

The answers were all the same. Yes, yes, yes and yes.

“The crowd was enormous, and the weather was sensational,” said Port Clinton Mayor Mike Snider, who emceed some of the stage shows and games. “I talked to people who were first-timers coming to the Walleye Drop, and they were very impressed with our celebration. They loved the bands and the DJs, and visiting all of the shops and restaurants.”

A real surprise was the international interest in the live-streaming coverage of the Walleye Drop by Buckeye Drone. Snider said summer workers in Port Clinton who have since returned to their overseas homes had let Snider know they avidly watched the Walleye Drop celebration.

“This year’s Walleye Drop greatly exceeded expectations,” said Snider. “I don’t know what we’re going to have to do to be able to top this year’s event.”

The 26th annual Walleye Drop is a small town extravaganza that has become a national and international favorite on New Year’s Eve, and the show must go on. The hard-working volunteers for the Wylie Walleye Foundation have created a user-friendly celebration that can entertain families flocking to a special party for boys and girls, including the indoors Minnow Drop at the Knights of Columbus Hall at 6 p.m.

The area bars and restaurants in town were all open and revved up for the busy New Year’s Eve. To make sure revelers could visit a few of the New Year’s Eve parties at area taverns, the 4th annual Bar Swim provided free busses from early in the evening until it was time for Wylie Walleye to drop into town. 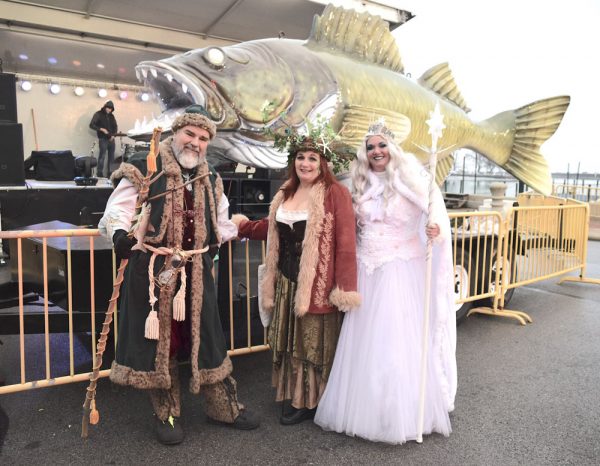 Royalty made an appearance at the 26th annual Walleye Drop in downtown Port Clinton on Saturday evening. Joining Wylie Walleye were, from left to right, Father Time, Mother Nature and the Winter Queen. (Photo by D’Arcy Patrick Egan)

Taxis and shuttles were also ready to provide rides home or to local hotels and motels, a safety first solution for locals and visitors.

The Walleye Drop Main Stage on Madison Street was busily entertaining the growing crowd on Saturday night with plenty of games, such as Touch-A-Truck and karaoke. Food trucks were busy, and yellow perch and walleye sandwiches, and souvenirs, were very popular at Port Clinton Fisheries next to the Main Stage. Crews of volunteer firemen and their fire trucks from around Ottawa County were on hand, and so were Ottawa County sheriff’s deputies and Port Clinton firemen and police officers.