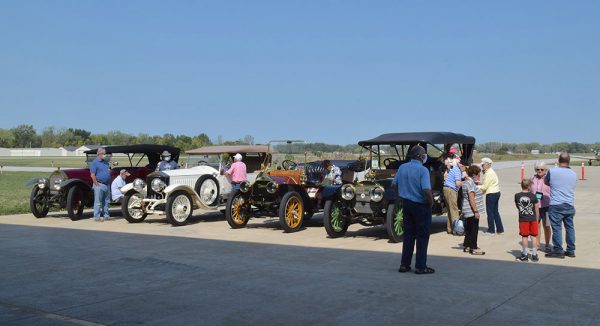 The early arrivals at a luncheon hosted by Port Clinton’s Liberty Aviation Museum were, left to right, a 1916 Simplex, a 1914 white Rolls-Royce, a 1910 Marmon and a 1912 Locomobile, all in perfect condition. The vehicles were manufactured during the brass car touring era on the early 1900s. (Photo by D’Arcy Egan)

Formed in 1993 at Snappers Saloon on the banks of the Ohio River in Ripley, Ohio, the 300-member club travels far and wide each year to show off their amazingly restored vehicles. Some of the most-photographed antique vehicles in America, snapshots of the cars while on the Miller Ferry started popping on the vehicles’ maiden voyage.

The Snapper’s Brass & Gas club is dedicated to the restoration, preservation and enjoyment of Brass Era Automobiles, said tour leader Norma Davis. The club’s activities emphasize the enjoyment of old time automobile touring away from the hustle and bustle of our modern lives — and in some of the most beautiful parts of the United States and Canada.

“We trailered our antique vehicles to Maine one year, then toured Nova Scotia,” said Davis. “This our first trip to this area, and the ferry boat ride, the Lake Erie Islands and the Marblehead Peninsula were beautiful. The people were really friendly, as well, making for a wonderful trip.”