Snider optimistic in State of the City 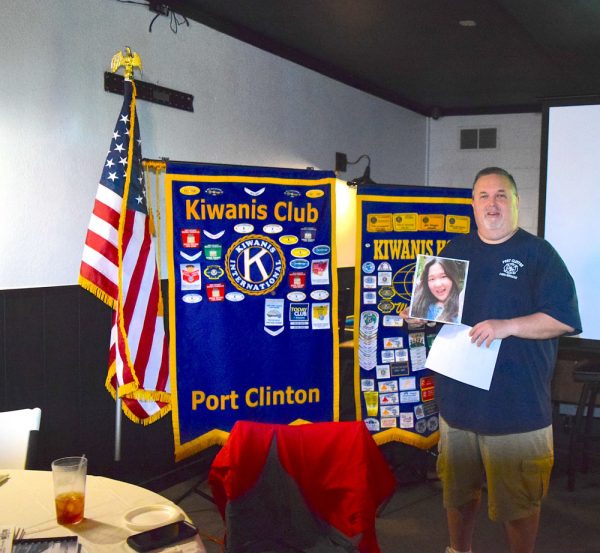 In his first term as mayor of Port Clinton, Mike Snider has been spreading the word that this is a new day for the old city, taking his State of the City address to groups around town, including the Kiwanis Club last week at the Ala Carte Cafe. (Photo by D’Arcy Patrick Egan)

“And boy, did that stage, and all of that music, make a difference,” said Snyder. More than a dozen empty retail buildings downtown are being renovated, including the century-old Port Clinton City Hall and the Odd Fellows Lodge, both sitting idle for decades,

Downtown has become a lively place to shop, dine and dance. That was helped by the MORA legislation Port Clinton approved, allowing the open carry downtown of alcoholic beverages.

“This is the song for Port Clinton that doesn’t end, fueled by a project to bring music and nightlife to the city,” said Snider. “It led to the rediscovery of our downtown, and the way we look at our lives on a daily basis.

“The Port Clinton positives outweigh the negatives for the first time since the 1930s, with a $34 million infrastructure project already started with water, sewer and utility upgrades over the next few years, followed by fixing the streets — all of them.”

It won’t be easy.

“Port Clinton is unique, proud and strong,” Snider said. “There are a lot of generational challenge to fix, and it’s going to take a long time. But we have time to address the changes, because we’re expecting better from our city, neighbors and ourselves.”

Snider praised the city’s many departments, from police and fire to water and sewer, parks, cemeteries, and many others. He pointed out that the city knows how to make equipment last. Of the five dump trucks and snowplows in the city’s fleet, two are 22 years old and another just had its 26th birthday.

Snider is also challenging city council and city department heads to look at new revenue streams. While the city does have parking fines, $20 tickets are seldom issued, and those fines should be boosted to $49. Homeowners should be fined for abandoned cars, trucks and discarded furniture on the property. The city should install solar panels on city buildings to help pay the bills, and examine vacation rentals, and if home owners are paying the required bed tax when they rent to short-term visitors.

“To have comprehensive citywide park and recreation programs we have to plan them,” said Snider.

While Port Clinton is a unique city on the Lake Erie shore, Snider is unique as its mayor. During his State of the City address at Port Clinton City Council last week, he wore a standard suit and tie. At a Kiwanis luncheon this week Snider returned to his mayor’s standard uniform — a T-shirt, Bermuda shorts, sunglasses and sandals.

The perfect look for Vacationland.