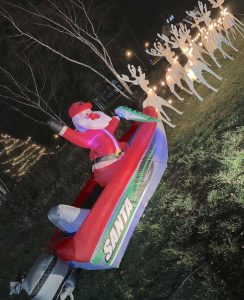 Did anyone see the large display at Waterworks Park over Christmas, of a colorful inflatable of Walleye Santa holding-up a fish in a motorboat? If you didn’t, you missed a unique replica representing Port Clinton – there is no way you could not have smiled!

On the very cold evening, when I first saw it, I thought it was absolutely adorable, so I photographed it, and immediately sent it to the editor of CITIES AND VILLAGES magazine. Apparently, she agreed, because it now graces the cover of the November-December issue. It was worth fighting the chilling winds to get a decent shot.

This week, I was pleased to receive a phone call from Mayor Mike, thanking me for highlighting Port Clinton, but sad to learn the display had been vandalized! The inflatable was cut, and the wooden reindeer, crafted by the Mayor’s father, laid broken and scattered over the ground. Immediately, I felt just as upset as he did!

Everyone in the world is going through one of the worst times of his/her life dealing with this Covid Epidemic. But, allowing ourselves to stoop-to-such-levels as the destruction of a colorful, cheerful Santa Claus display in a small town is truly unbelievable. Vandalizing anything is a deed that puts you into a category all by yourself. How much enjoyment could you possibly get from the quick, accomplishment of this feat?

Was this a misdeed? A dare? A last-minute thought? Did you think it was funny? No matter what your motives, you now need to relieve your conscience and step-up-to-the-plate once more, by taking credit for your work, because that is what men, women, boys and girls do when they are wrong. Vandalism is wrong. Do something for-the-good now, your own good – contact the Mayor.

Mr. Wylie Walleye and Friends, I noticed that we are not getting the paper at our residence this winter. I was wondering if there was a place where...

Letter to the Editor, The final tally is in! During the recent "Ottawa County Bundle Up" clothing drive, the Ottawa County Community Foundation...

Are you still in The Beacon Newspaper Wylie or is this just a scam? Thanks, Judy   Judy, Our popular mascot Wylie, the pride of The Beacon, is...