The brand, spanking new softball turf field for the Danbury School District was christened last week by the girls softball squad, the crown jewel of the new or enhanced outdoor athletic facilities at the Fields at Stonecrusher Park.

The athletes enjoyed the experience of playing against rival Port Clinton High School on the sophisticated turf, and the coaches and school administration want to keep their new field pristine. That means sunflower seeds, gum or Gatorade for the players. Things that could gunk up the slick, colorful carpeting are not allowed.

“The softball field looks fantastic, and the girls are excited to play on the new turf,” said Head Coach Mike Zelms. “It’s so nice to have our own field at the school, a field that I know any school in the county would love to have for their athletes.”

The infield turf is colored a muted brown, just like a real dirt infield, while the outfield turf is bright green. The outfield fences draped in bright blue are 200 feet from home plate. Compact stands provide seating behind protective fencing on both the first and third base sides of the field.

“Because we didn’t have a softball field of our own in the past, the girls have been playing on the athletic fields at Danbury Township Hall,” said Athletic Director Keith Mora. “The new turf field is magnificent as part of our western campus, the centerpiece of about $1 million in enhancements and improvements to the athletic facilities.”

Danbury Schools acquired the 36-acre western campus property in 2015, which includes 11 acres donated to the school by the LaFarge Corporation.

The turf was installed by Maumee Bay Turf Center in Oregon, Ohio, said Mora. The company is nationally-known for its turf fields, which including stadiums that have hosted a Super Bowl and a national championship football game. 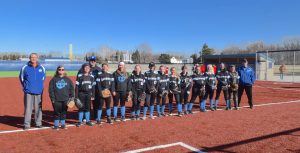 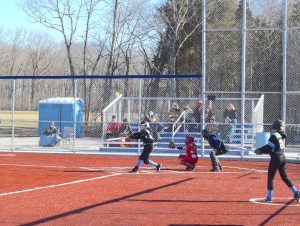 CUTLINE: A Danbury High School batter hits a fly ball to the outfield against Port Clinton High School during the first game played on the school’s new turf field at the Fields of Stonecrusher Park.