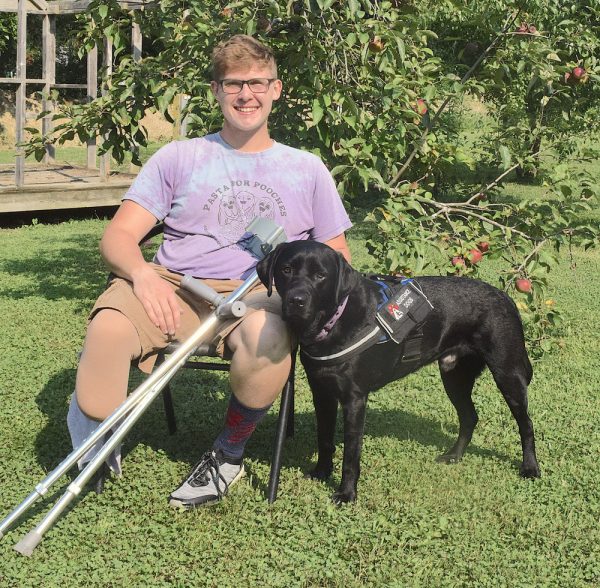 Zac Moyer, 18, of Oak Harbor has help getting his life back on track after a terrible automobile accident five years ago, thanks to his service dog, “Sparky,” a three-year-old Labrador retriever. (Photo by D’Arcy Patrick Egan)

Zac Moyer, 18, is still working hard to get his life back on track after a horrific automobile accident five years ago near his rural Oak Harbor home. Giving Moyer a mental and physical boost this summer has been a new teammate in the Moyer family, “Sparky” the service dog.

Sparky has become Moyer’s four-legged partner and an inseparable friend, thanks to The Ability Center of Greater Toledo in Sylvania, Ohio, and its Assistance Dog Program. The three-year-old black Labrador retriever had spent more than two years training for the job, and the moment the service dog vest is slipped over his back, Sparky’s focus on helping Moyer never wavers.

“I’ve struggled with anxiety ever since the accident, and Sparky is now my constant support, both physically and mentally,” said Moyer. “If I can’t pick something up — my left hand still doesn’t function well — or open a door while on my crutches, Sparky is right there. He’s so tuned to my needs.”

Moyer’s right leg had been useless since the accident and the teenager was grateful doctors finally removed the severely damaged lower leg three weeks ago. He will be outfitted with a prosthetic leg soon at Chris Perry Prosthetics in Perrysburg, Ohio, and continues his slow recovery from the brain damage he suffered in the wintertime one-car crash that also injured his older siblings, Denna and Eli.

“It was a very difficult time for my wife, Alicia, and me, with the chaos of the crash and our three kids in the hospital,” said Doug Moyer, a self-employed furniture and cabinet maker. “When I learned about The Ability Center’s Assistance Dog Program, I got on the waiting list to try to get a dog for Zac.”

A well-bred Labrador retriever, Sparky’s training began with prison inmates, then a foster family and professional trainers. After a year on the The Ability Center waiting list, Zac and Sparky began an intense two-week training program as Sparky joined the Moyer family.

“There was an instant bond,” remembered Zac. “The first day we met, when Sparky saw me he bolted over to me and sat between my legs. It was as if he was telling me, ‘I’m yours and you’re mine.’ He’s such a super smart dog.”

Zac, who is finishing up his high school career at Ottawa County Christian Academy in Oak Harbor, still has issues with the brain damage suffered as a 14-year-old in the crash on the icy, rural road.

“My brain has been slow to heal, and I have trouble with reading and spelling,” said Zac. “Reading is a big part of life, and I’m hampered by my reading skills. But I’ve learned to be a problem solver, figuring ways to get around shortcomings.”

He would like to get back to farm chores, which he enjoyed before the accident, but his body can’t handle the physical requirements. And a desk job is out of the question, said his father, because Zac needs to be active and involved or arthritis sets in.

“We need to find an occupation that benefits Zac and Sparky, so he can get on with the rest of his life,” said Moyer.

Sparky has made a big difference in giving Zac confidence and hope for the future, said his father.

“Sparky is a great dog around the house and he listens to my commands well,” said Moyer. “When that service dog vest goes on, though, that all changes. When Zac speaks, Sparky listens. They’re a team.”

The Ability Center has served seven counties in northwest Ohio since 1920, including Ottawa, Lucas, Wood, Fulton, Henry, Defiance and Williams, and strives to make the community disability friendly through advocating, educating, partnering and providing services supporting people with disabilities.

Its recent Assistance Dog Graduation in July spotlighted The Ability’s Center’s work as it recognized the 2020 and 20021 graduates of service, therapy and school therapy dogs. The “passing of the leash” ceremony marked the end of a two-year training period for the assistance dogs, which provide greater independence to many disabled.

The Ability Center is presently looking to recruit volunteers for the Assistance Dog Program. The agency needs Puppy Raisers, who can give the young dogs a safe home for about 10 weeks; Dog Fosters to house, train and nurture service dogs that are five months to two years of age; and Dog Sitters who can take in a dog for a couple of days or up to two weeks when Dog Fosters are not available.