Special seniors will leave behind an incredible legacy 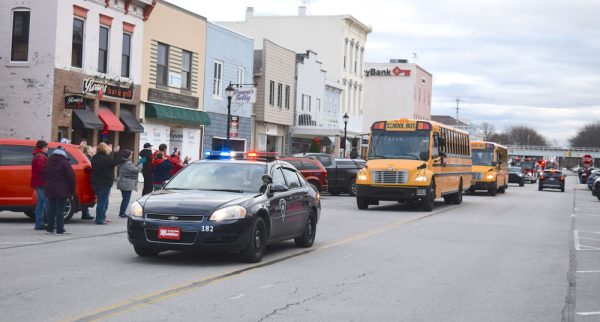 The Port Clinton Redskins football team was the talk of the town in recent weeks, and the focus of a parade through Port Clinton on Friday afternoon as busses headed for the Division IV state semifinals against Youngstown Ursuline. (Photo by D’Arcy Patrick Egan)

After Port Clinton went 20-19 (.513) over the last four seasons, there was some uncertainty as to what to expect from this team.

But led by ninth-year coach Beau Carmon and 12 seniors, the Redskins would take a proud program to unprecedented heights, winning a Sandusky Bay Conference Bay Division championship, a school record 13 games and the first regional title while creating lifelong memories for themselves and the community.

The season ended on Friday when Port Clinton lost, 34-17, to Youngstown Ursuline in a Division IV state semifinal.

The highlight of the season was defeating reigning state champion Van Wert, 49-21, in the regional finals.

Carmon talked about what the seniors have meant to the program.

“I think they went .500 in eighth grade. A lot of classes are judged in middle school — they didn’t have the accolades that the class behind them had,” he said. “They have absolutely redefined what it meant going from a junior to a senior can mean on any team. You can’t give up on a kid on any level because you never know how they’re going to develop from their junior to senior year.

“We happened to have quite a bit of development — good football players as juniors that became great football players as seniors. In football, you’ve got to have so many kids play different positions. I’m so proud of them because we’ve had some great classes come through that deserved better.”

Another highlight to the season came when the ‘Skins eked out a 19-14 win over Perkins in the regional semifinals, a game that saw Port Clinton score on a 1-yard touchdown run by Cornell in the closing minutes.

Following a 21-20 loss to the Pirates in week three, the ‘Skins won 11 consecutive games and allowed more than 21 points just once.

Whether it was Jackson coming up with an interception, Cornell running for a big gain, Hurst catching a long pass, Hanson kicking a field goal or Shell blocking to create a hole, this class came up with big plays when it mattered most.

“After the game on Friday, I sat back on the bus and reflected on my whole career, even back to peewee football. It felt like everyone was behind us every step of the way, and even once we got to the regional finals, and we were the only SBC team left in Division IV, not only was our community behind us, but we had people from other towns supporting us,” said Cornell. “That just goes to show how special high-school football is to so many people.”