Spend the weekend with Woodie! 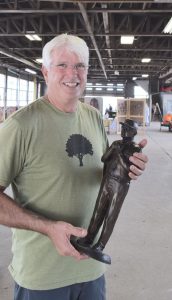 Noted Sculptor Andy Sacksteder at The Art Garage in Port Clinton has announced he is donating a special sculpture of fabled Coach Woody Hayes to the “Toasting Transformation” Live Art Auction on Saturday, Aug. 21 from 6-9 p.m. (Photo by D’Arcy Patrick Egan)

Sculptor Andy Sacksteder of The Arts Garage in Port Clinton has created many memorable bronze sculptures in his career, but his first life-sized bronze is his most-photographed accomplishment.

“Andy’s statue of legendary Ohio State University Football Coach Woody Hayes, which stands near The Varsity Club on Lane Avenue near The College Traditions book store, is one of the Top 7 spots for selfie photos on campus,” said his wife, Chris Sacksteder. “People come from far and wide to have their photo taken with Andy’s statue of Woody!”

Her husband has created three smaller Woody Hayes sculptures depicting his 5-foot, 10-inch life-sized Woody Hayes. Chris came up with a wonderful idea for making the “Toasting Transformation” Live Auction party on Saturday, Aug. 21 at The Arts Garage in Port Clinton something special for Buckeye fans.

“We’re donating one of the smaller ‘Woody Hayes’ sculptures to the Greater Port Clinton Area Arts Council (GPCAAC) party, to go along with the dozens of pieces of artwork by local artists that will be auctioned,” said Chris Sacksteder.

“We’re so grateful for the donation of the Wood Hayes statue!” said Vice-President Catharine Hadley of the GPCAAC. “The Sacksteders have been so generous, and we truly appreciate it.

“The starting bid will be $1,500, and the statue is valued at more than $3,000. With so many Buckeye fans in the area, I am sure this amazing donation will generate a great deal of interest.”

Featured will be local foods, drinks and entertainment. New artwork from dozens of artists will be on display, bidding on gift baskets, and a Battle of the Artists contest.