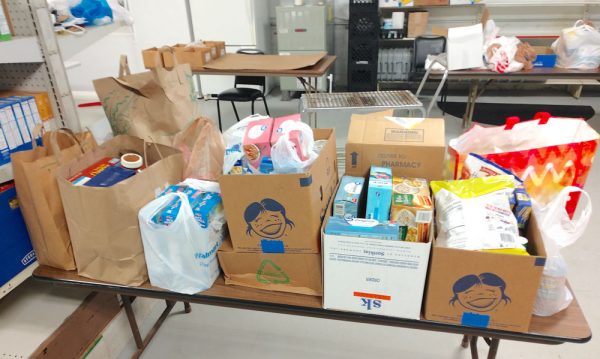 The confirmation students at St. John Lutheran Church donated more than 300 items they gathered during a food drive for people and pets, a project that benefited St. Vincent de Paul Food Pantry and the Humane Society of Ottawa County.

PORT CLINTON – Confirmation students at St. John Lutheran Church recently presented more than 300 food items they gathered — with a little help from the Ohio State-Michigan football rivalry — as part of their community service project to the local food pantry and humane society.

They also collected pet food and treats that were donated to the Humane Society of Ottawa County.

“This project is important to me,” said Libben, 13, daughter of Jennifer and Ronald Libben. “I hope the things donated will help people, and animals, with being able to eat and might help them feel good.”

For several weeks, the students collected food items in the church sanctuary through a friendly competition. Ohio State fans put their donations on one table, and Michigan fans put theirs on another to see who could gather more. Members of St. John and Trinity United Methodist Church participated. 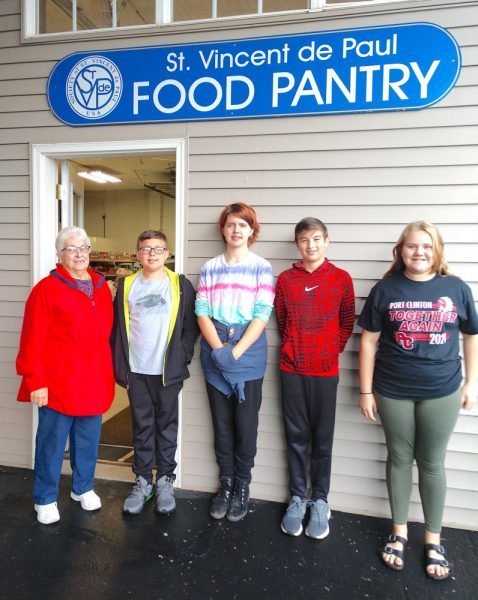 The Ohio State fans won, collecting 224 items to the Michigan fans’ 63. Those numbers do not include additional donations to the food drive from Trinity United Methodist, which put the collection total over 300.

“Thank you to the congregation and Trinity United Methodist for their donations,” said Higgins, 13, son of Megan and Shea Regal and Gary Higgins. “Go OSU!”

“I hope it will help the people and families in need,” he said.

At St. John, confirmation students in their second year choose and complete a community-service project. Hatt is in her first year, but she will be the only second-year student next year. Coppeler, Higgins and Libben invited her to participate in the project this year instead of doing a project by herself next year.

“This allowed us to help people in our community and give back,” said Hatt, daughter of Amanda and Delbert Hatt. “It also makes me appreciate what I have and all the people who gave freely.”

St. John Lutheran Church is located at 207 Adams St. in Port Clinton. It is a part of the Evangelical Lutheran Church in America. For information, visit www.stjohnlutheranpc.com. Like St. John on Facebook at @SaintJohnLutheranPC.