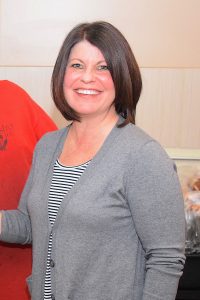 Area Director Stacy Tenny Maple of United Way in Ottawa County (UWOC) has left the social agency to become the new director of culinary services at Lakeside Chautauqua in Lakeside. Alison Lanza Falls of Catawba Island, who has served in many volunteer roles with United Way over the last 17 years, is providing interim leadership at UWOC. April Schalk, administrative assistant in the UWOC office, will take on additional duties during the transition.

“Alison is a committed and experienced leader, and has been a tireless volunteer with United Way over the years,” said Carlson. “I am so thankful that she is willing to serve in this capacity.

“April’s experience with United Way allows her to provide continuity and I am delighted that she is willing to take on additional work during this transition. She is a tremendous asset.”

UWGT will continue to provide services and oversight to UWOC and will be helping with the recruitment of a new area director.

“Good things are happening in Ottawa County, and we are here to ensure they have the support needed to continue effectively serving county residents,” said Pestrue.

Maple is a woman who likes to wear a lot of hats and has enjoyed a wide range of careers. Her favorite, though, is a chef’s hat.

Maple said she thoroughly enjoyed directing the United Way in Ottawa County, but her new position will put her back in the kitchen and in the classroom. A noted chef, Maple guided the pay-it-forward Bistro 163 restaurant in Port Clinton to five-star status.

Maple’s job will be to bring the culinary arts and education to Lakeside. And good things to eat.

“For the last five summers, I’ve had cooking classes at Lakeside,” said Maple. “They were very popular. Now I’ve got the chance to amp it up a bunch. Education, wellness portions and programming will all be included. The sky’s the limit with what can be done with a cooking school.”

Maple will remain on the board of Bistro 163 as the chef’s consultant.

“Stacy had made many contributions during her tenure for which we are very grateful. We are pleased to know that she will remain an active
United Way volunteer,” said Carlson.