Tourism generates $2.1 billion in sales in 2018 around LESI region

Lake Erie Shores and Islands, the regional tourism agency that has had great success luring people to Ottawa and Erie county attractions and Lake Erie, set records in 2018, according to President Larry Fletcher at the annual State of Tourism address last week at Catawba Island Club in Port Clinton.

“That’s how we want visitors to feel when they come here,” said Fletcher. It might be a leisurely boat ride on Lake Erie, he said, a day on the beach, a taste of casual island life or a heart-thumping ride on a Cedar Point roller coaster.

The end result last year, pointed out Fletcher, was a lodging industry that had a total of $180 million in sales, $6.9 million in lodging taxes and $24.7 million in local sales taxes.

The Lake Erie Shores and Islands welcome centers in Port Clinton and Sandusky had 24,543 visits by people from 43 states and 10 different countries.

Director Mary Mertz of the Ohio Department of Natural Resources was the keynote speaker at this year’s State of Tourism luncheon, and she had good news for those who enjoy the Lake Erie Island region and its many activities.

“Just this morning I was testifying at budget hearings in Columbus,” said Mertz. “The budget includes $900 million set aside for the H2Ohio program to improve water quality around the state, with a focus on Lake Erie and its watershed,” said Mertz. “This year’s budget also includes $47 for land acquisition (for conservation and recreation, including hunting).

Mertz said plans are in the works to make North Bass Island, which the state purchased a few years ago for $17.5 million, more available to recreational users.

“We don’t want to create another state park, but we do want people to enjoy biking, hiking, bird watching or paddling around the beautiful island,” said Mertz. Ohio has budgeted $500,000 for a dock on North Bass Island that would handle visitors arriving by pleasure boat or ferry.

Mertz said Gov. Mike DeWine is already getting excited about attending Governor’s Fish Ohio Day in Port Clinton for a day of walleye fishing on July 2. 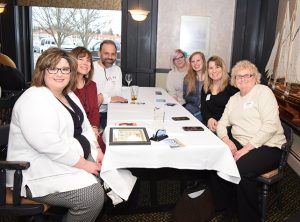 Manager Kim Bartish and her crew at the Holiday Inn Express and Suites in Port Clinton were presented with the Superior Hospitality Recognition Award at the Lake Erie Shores and Islands annual State of Tourism gathering at Catawba Island Club. From left to right are Bartish, Martha Dyer, George Ruta, Ally Norden, Aileen and Ruth Blankenship and Pat Stinson. (Photo by D’Arcy Egan) 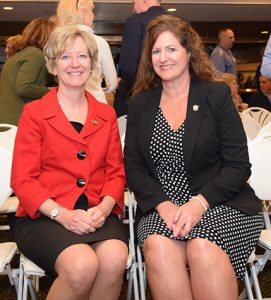 Director Mary Mertz (left) of the Ohio Department of Natural Resources and Chief Kendra Wecker of the Ohio Division of Wildlife were featured at the annual State of Tourism address on April 4 at the Catawba Island Club. (Photo by D’Arcy Egan)