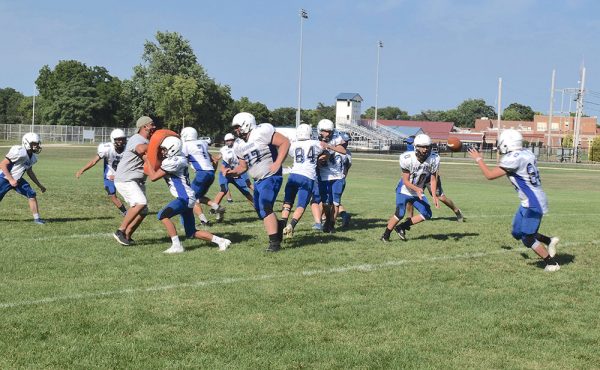 The Danbury Lakers will be playing 8-man football this season, and Coach Keith Mora had his squad on the practice field last week to get them ready for the team’s nine-game season. (Photo by D’Arcy Egan)

State officials were working on a final plan last weekend to allow high school football to begin its season on Friday, Aug. 28. The announcement will be tentatively be made at Gov. Mike DeWine’s regular press conference on Tuesday, Aug. 18.

State officials have already recommended that the football seasons begin on Friday, Aug. 28, and are limited to six games. The postseason would begin on Friday, Oct. 9 and state championship games to be played by Nov. 21.

“We’re going to have an announcement on Tuesday that Lt. Gov. Jon Husted and I are going to make about high school sports,” said DeWine last Friday. “We’re working with the Ohio High School Athletic Association to get it right,” and want make high school football as safe as possible.

DeWine said he wanted the decision to be made by parents, followed by school officials and local and state health officials. He did express the belief that sports fans attending football games should be restricted in size, as well as for the soccer and field hockey games given the green light to begin on Friday, Aug. 21.

Already approved are the seasons for low or non-contact sports. Golf and tennis seasons have already begun; girls volleyball begins Aug. 21; and cross country will start on Aug. 24.