EDITOR’S NOTE: This is a Guest Column from State Rep. D.J. Swearingen of Huron, who serves Ottawa County, and State Sen. Rob McColley of Napoleon opposing the shutdown of the Enbridge Line 5 pipeline that services a Toledo refinery. 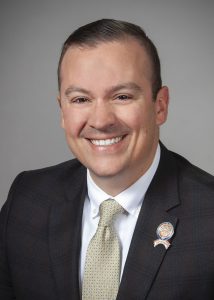 As members of the Ohio Legislature representing various communities in Northwest Ohio, we are gravely concerned about the present situation surrounding the Enbridge Line 5 pipeline.

For context and background, the Toledo Refining Company refines crude oil delivered through Enbridge Line 5, which runs from Canada through Michigan to its refinery in Toledo.

The Governor of Michigan and the Michigan Attorney General are currently trying to shut down Enbridge Line 5 through a lawsuit filed in Michigan. Should their efforts succeed, our community and local economy in Northwest Ohio would be devastated by the result.

First, the Toledo Refining Company’s refinery works to refine crude oil so that gasoline can be produced at affordable rates for consumers. This is in part due to the efficient and affordable transfer of crude oil through Enbridge Line 5. As efforts continue to shut down these pipelines nationwide, the costs of gasoline will only continue to rise. The reason for the attack on the Enbridge pipeline may be done under the disguise of environmentally conscientious policies, but there are already proposals being offered to operate the Enbridge pipeline both now and in the future in an environmentally-friendly way.

Second, our local economy greatly benefits from the Toledo Refining Company’s Toledo site. Thousands of good-paying Toledo jobs, as well as countless suppliers, bars and restaurants that benefit from the Toledo Refining Company’s presence in Toledo will be choked off should Enbridge be shut down. This is the last thing our local economy needs especially as the economic recovery from Covid-19 continues.

We call on Governor Whitmer and Attorney General Nessel to stop the efforts to shut down the pipeline immediately. We support the resolutions currently in the Ohio House and Senate that encourage the continued operation of the pipeline.

Finally, we will support any future efforts of Attorney General Dave Yost in seeking relief through a lawsuit that helps keep this vital asset open.