Steelhead trout for the future being released in NE Ohio 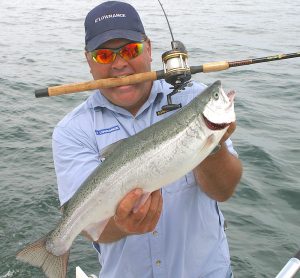 Jim McConville of North Ridgeville likes to troll the wide waters of Lake Erie in summer for steelhead trout, known for their ability to jump surprisingly high out of the water after being hooked. (Photo by D’Arcy Egan)

The trout pens at the Castalia State Fish Hatchery can hold more than 450,000 yearling steelhead trout, and the huge class of 6- to 8-inch smolts have taken a ride to one of six Northeast Ohio rivers this spring.

It won’t be legal for fishermen to keep one of the small trout, and anglers are discouraged from even targeting the vulnerable young fish.

Ohio’s steelhead trout program at the Castalia Hatchery has resulted in the creation of a world class fishery in Northeast Ohio.

After their release in the rivers and streams, the youngsters will head to Lake Erie to feed ravenously all summer long. When they return in fall and winter, the “silver bullets” will have grown substantially, providing a fishing thrill for fly and spin fishermen wading the rivers.

In just four or five years, the trout will be a tackle-busting 28 to 30 inches in length and weigh 8 to 10 pounds.

Having sort of a GPS directional unit in each steelhead trout’s noggin, the fish return to Lake Erie tributaries where they were released as smolts, becoming the stars of the Vermilion, Rocky, Chagrin, Grand and Ashtabula rivers and Conneaut Creek. Even better, unlike coho and chinook salmon, which die after spawning, the silvery trout will return year after year.

Ohio Division of Wildlife hatchery personnel and trucks from around the state are on a tight schedule, delivering 40 truckloads that ferry more than 62,000 pounds of fish. Given current COVID-19 guidance and restrictions, fishery managers are requesting everyone in the local angling communities give the hatchery trucks and personnel a wide berth, said Hatchery Manager Kevin Kayle.

Do not interfere with stocking operations, and practice extra social distancing. Do not offer to help the fishery staff, or walk up to the trucks or stocking tubes to chat with them.

They have a job to do safely and efficiently, and they have to move on. The ODOW can’t risk its staff becoming coronavirus carriers.