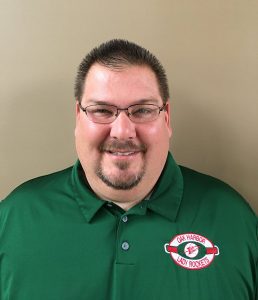 The Benton-Carroll-Salem School District and the Oak Harbor Athletic Department have named Adam Steinbrick as the new head girls basketball coach. Steinbrick was the Rocket’s junior varsity coach last season, and also has a vast amount of coaching experience at both Huron and Danbury Schools.

Steinbrick is completing his 23rd year in education, and his 20th as a teacher for Danbury Local Schools. He teaches 7th and 8th grade science at Danbury Middle School. He previously taught for three years in the Huron City School District.

A graduate of Danbury Local Schools, Steinbrick earned his Bachelor of Science degree from Bowling Green State University in 1997, and his Masters in Technology degree from Marygrove College in 2002.

Highlights during Steinbrick’s coaching career include: Toledo Area Athletic Conference Coach of the Year in 2003 (football) and also in 2015 (golf); Sectional Championships in 2011 and 2015 (baseball), and 2017 (basketball) when his team went 18-6.

He was part of a Sandusky Bay Conference Championship and State Regional Championship in 1998 in football while at Huron High School. Steinbrick and his wife, Amy, have three daughters and one son —   Charleigh, Ryann, Riley and Carson.

Besides coaching basketball, Steinbrick enjoys raising Belgian Draft Horses and spending time with his family. Steinbrick’s motto is “Never be outworked,” conveying that hard work always pays off for those willing to do it.

“Coach Steinbrick brings a great deal of passion and energy for the development of young people and the game of basketball to Oak Harbor.  I look forward to his leadership of this new era in our girls varsity basketball program,” said Supt. Guy Parmigian.