Steinbricks primed to lead Rockets back to winning ways 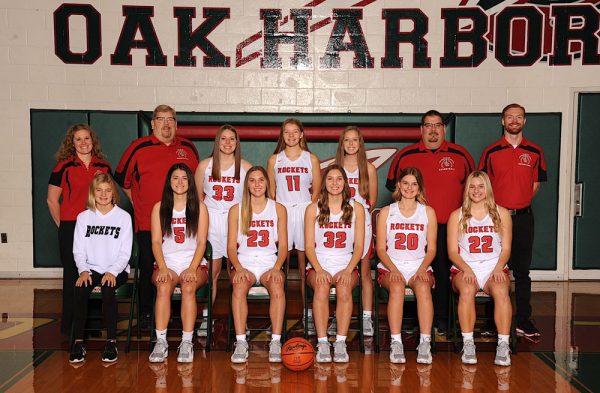 OAK HARBOR — Ryann and Riley Steinbrick are primed for big senior seasons to help Oak Harbor get back to its winning ways.

Katie May, a 5-9 senior, is a wing/post, and 5-8 sophomore wing Nora Schmidt is currently battling it out with 5-9 junior Emma Hand for the final starting spot in the post. Other players that could see some playing time are 5-7 sophomore post Megan Rife and 5-7 junior post Jaclyn Cory.

The Steinbrick twins and May are returning starters.

The rotation, which doesn’t include much size, is pretty thin and includes just eight players.

“Whoever doesn’t start will get a lot of playing time,” said Oak Harbor coach Adam Steinbrick, “and we’re going to develop our younger girls.”

Those post players must help replace the production lost from the graduation of Auna Tack, who averaged 12.1 points and 9.3 rebounds last year, and Kaitlin Paul, who was also a starter.

“We’re going to look to spread the floor and try to put other teams in a situation where we like to isolate some players and take advantage of our scorers. We’re going to give several different looks and look to attack.”

Steinbrick likes his team’s athleticism and believes it can be used to wreak havoc on the defensive end.

“Like any great team, it starts with ball pressure and being able to lock down your opponents. We’re trying to do that and get the girls in shape,” he said. “Quite a few of our girls, because of the tournament run in soccer and volleyball, were short some practices, but they’ve picked it up well and are working extremely hard.

“I like our team camaraderie. Some girls played for me as a JV coach, so some of them have been with me for three years. It’s about them understanding the terminology after being with me and everyone being on the same page. It shows in practices and scrimmages. When you are trying to put a program together, it takes some time, and I can see where it’s starting to click.”

Steinbrick expects Margaretta to be the top team in the Sandusky Bay Conference Bay Division. Port Clinton has a new coach, Willard has had some good seasons recently and Edison and Huron are in the mix as well.