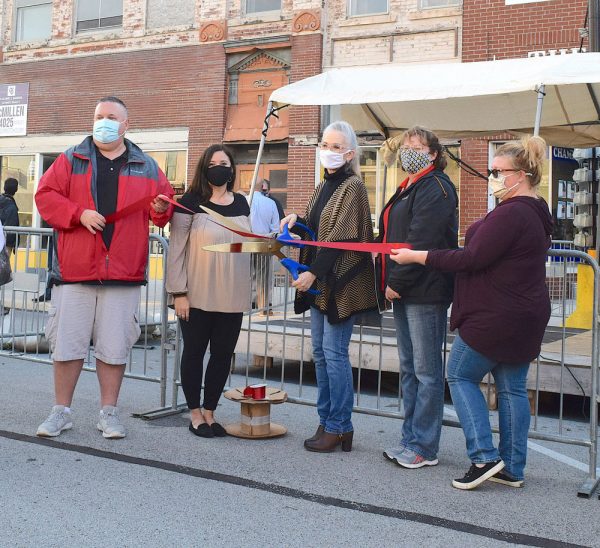 Mary Snyder can feel a vibrancy permeating Port Clinton right now. It’s been 43 years in the making, she said, and it certainly feels good.

Snyder opened Mary’s Blossom Shoppe on Madison Street in downtown Port Clinton more than four decades ago, and the florist has become a Port Clinton legend. Whether you’re celebrating a special holiday, helping to placate a wife who’s mad at her husband or picking up a bouquet for the prom, Snyder will make it special.

Port Clinton hasn’t been very special in a long time, though, its downtown slumping after the local factories shut down many years ago.

“What’s been going on here the last couple of years, that’s been special,” said Snyder, who used a pair of jumbo scissors to cut a blue ribbon to celebrate the completion of the Port Clinton Streetscape that has been turning heads and helping change the direction of the Lake Erie port town.

“You can feel the vibration, the change,” said Snyder. “It has been a great group effort, a big push to modernize and improve Second Street, followed by Madison Street and Jefferson Street. The city widened the streets and installed the beautiful lights, and now people want to come downtown again to shop and dine and join friends.”

Not all of the improvements are visible. Underground water, sewer and electric lines have been given the downtown infrastructure a major boost, provoking a surprising amount of interest in commercial real estate.

“With the new facades on Madison Street, people are interested in bringing new businesses to downtown,” said Snyder. “There have been quite a few buildings sold over the last 18 months, and new faces in town. It’s turning Port Clinton into a nice little town that locals, transients and tourists can enjoy.”

The new MORA law allowing open containers of alcohol on the downtown streets certainly helped. So has the Meals on Madison entertainment area, allowing open air dining and a fresh flow of outdoor music.

Snyder was the perfect choice to cut the blue ribbon on Thursday to dedicate the streetscape. Mary’s Blossom Shoppe has been a fixture for so long that Mayor Mike Snider once thought her last name was “Blossom.” As a purveyor of fine floral arrangements, Snyder has always had the inside track on what’s going on downtown.

“For a long time, it was rare for any of the city fathers to actually live downtown,” said Snyder, with a laugh. “It’s great that some of our council members are now downtown residents, and really care about the city.”

One of those officials is Third Ward Councilwoman Margaret Phillips, a retired Port Clinton High School schoolteacher whose family used to own Phil’s Inn, a legendary spaghetti restaurant.

“I’ve been on city council since 2013, and seen a lot of improvements in a city that desperately needed repair,” said Phillips. “We needed to make Port Clinton into a town we could be proud of, and I can assure you this council isn’t finished yet.

“This administration has really made a difference. The buildings are being renovated, and there are a lot of reasons to believe new businesses will come,” she said. “It all started when former Mayor Debbie Hymore-Tester pushed to renovate Second Street. We had to work around some of the former politicians, but today the council and Mayor Mike Snider are working well together, and Madison and Jefferson are done, too.”

When all of the street construction was being done in recent years, downtown councilwomen Phillips and Beth Gillman of the First Ward were constantly supervising work crews and keeping council abreast of the developments.

One crew even presented Phillips with a foreman’s shirt.

“The crews understood that we cared, and they worked hard to get things right,” said Phillips.