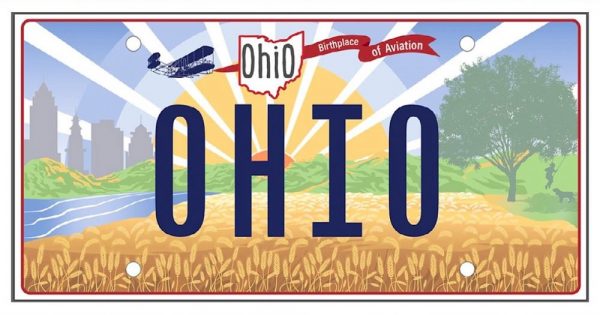 Ohio Bureau of Motor Vehicles debuted its new license plate for 2022, but it first needed a quick fix. The original “Sunrise in Ohio”’esign had the Wright Brothers aircraft going in the wrong direction.

The first version of the license plate that debuted in Columbus featured the iconic Wright Brothers’ airplane prototype. But the airplane was facing the wrong direction, towing a “Birthplace of Aviation” banner from the wrong end of the airplane.

The Ohio BMV designed the new “Sunrise in Ohio” license plate with inspiration from the Great Seal of Ohio, the state’s diverse landscapes, Ohio’s past and present innovations, and the state’s bold, bright future.

“We wanted Ohio’s new license plate to reflect the heart and soul of our state and to encapsulate where we’ve been, who we are, and where we’re going,” said DeWine. “The imagery on our new license plate symbolizes what makes Ohio beautiful, unique, and extraordinary.”

The “Sunrise in Ohio” license plate pays tribute to Ohio’s majestic waterways and rolling landscape. A farm field represents Ohio’s strong roots in agriculture, while a skyline represents Ohio’s momentum as a leader in technology and innovation. The Wright Brothers airplane symbolizes Ohio’s history as the Birthplace of Aviation, and a child swinging from a tree with a dog symbolizes Ohio’s youth and future generations.

“We are pleased and honored to be able to offer this new license plate to our customers,” said the BMV Registrar Norman. “We look forward to seeing the “Sunrise in Ohio” plate proudly displayed on our great state’s roadways soon.”

The new plate will be available to drivers online at bmv.ohio.gov and at all local deputy registrar locations beginning on Dec. 29. Over the past 20 years, four new standard license plate designs have been introduced, including the “Bicentennial” plate in 2001, the “Sunburst” plate in 2003, the “Beautiful Ohio” plate in 2009, and the “Ohio Pride” plate in 2013.