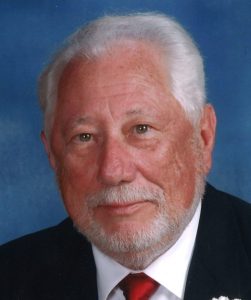 T. Donald Dougherty, 84, of Catawba Island, died Saturday, May 23 at Hospice of Northwest Ohio, Toledo. He was born in Darby, Pennsylvania, a son of the late Thomas C. and Lydia (Losco) Dougherty on April 17, 1936. He graduated from Darby High School in 1954 and joined the USNR until his enlistment was completed in 1962 receiving an honorable discharge.

He married the former Ellen Marie Carroll of Cicero, IL in 1961 and she preceded him in death on October 8, 1991. and had two sons John J. Dougherty, deceased, Matthew J. Dougherty of Maumee, and for the past 15 years he has been inseparable with Addie Reino.

Mr. Dougherty arrived in the Port Clinton area in 1978 with his family to begin construction of Davis-Besse Nuclear Units 2 and 3. In early 1979, the incident at Three Mile Island in Middletown, PA canceled plans to increase electrical power in Oak Harbor. He joined the Prudential Insurance Company of America in 1984 until retirement in 1995. He was a Life Underwriting Training Council Fellow and member of the National Association of Security Dealers, North Central Life Underwriters and a Notary Public, State of Ohio.