Talisk brings a blast of Scottish folk music to the Listening Room on Aug. 14 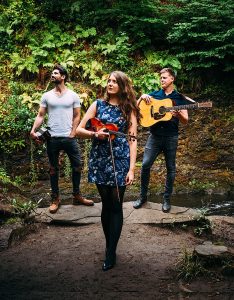 The Scottish trio Talisk is making its first headline tour of the United States, and will visit The Listening Room in Port Clinton on Wednesday. Aug. 14.

The trad music scene might be a little obscure around the Midwest, but not if you’re hanging around the clubs of Glasgow, Scotland. That’s where a trio of Scottish musicians make up the band Talisk, which has taken Great Britain by storm – and are expanding their energetic musical talent to North America, including Port Clinton on Wednesday, Aug. 14.

The group will be playing The Listening Room at Our Guest Inn in downtown Port Clinton, and the Scottish firebrands are looking forward to their first headline tour. Talisk did appear at The Listening Room last March when they opened for We Banjo 3.
Mohsen Amini, the BBC Radio 2 Folk Awards’ Musician of the Year in 2018, called from the U.K. to chat about coming to America, and the trio he helped create just five years ago to play Scottish Trad rock.

“It is a Scottish chat music, and way more developed now,” said Amini. “It’s not acoustic music any more, but a bit of a Scot slam, or Scottish music that’s slamming.”
All instrumental, Amini plays the concertina, a free-reed musical instrument, like the various accordions and the harmonica. Hayley Keenan is on fiddle, and Graeme Arstrong plays guitar. “Everywhere we play people love our music,” said Amini. “It’s an old music unique to Scotland, a bit of a cliche of Ireland and Scotland. We’re all in our mid-20s, and slowly getting away from just being a good, young band.”

Their latest album, “Beyond,” represents a significant step forward on their musical journey, said Amini.
They’ve been winning awards for their fast-paced, energetic music, but constantly evolving, said Amini. Their sound has been identified as layered and intricate, and shines on the live stage.